VS Battles Wiki
Register
Don't have an account?
Sign In
Advertisement
in: Characters, Male Characters, Demons,
and 34 more 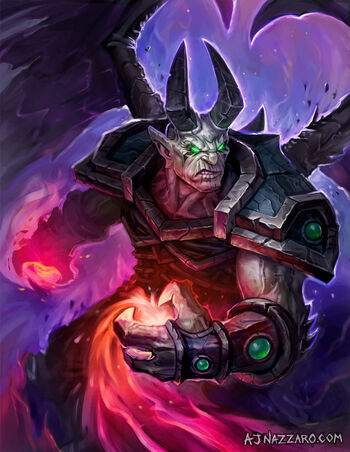 Balnazzar was one of the three nathrezim left behind in Lordaeron to oversee its demonic conquest. However, following the defeat of Archimonde and the return of Prince Arthas, he, alongside his two siblings fled, quickly regrouped, and concocted a new plan to destroy Arthas once and for all. Though they ultimately failed to destroy Arthas, the undead prince eventually left Lordaeron, leaving Balnazzar to rule the Plaguelands. Soon after, Sylvanas laid siege to Balnazzar's forces and ultimately forced Varimathras to execute Balnazzar. However the execution was faked and Balnazzar later came to possess the body of Saidan Dathrohan, a founder of the Scarlet Crusade. Following the war against the Lich King, Balnazzar and his undead Risen were killed by adventurers and forced back to the Twisting Nether, where he would return from years later during third invasion of the Burning Legion. Balnazzar was finally killed in the Netherlight Temple located in the Twisting Nether, thus dying a permanent death.

Attack Potency: City level (Stronger than most demons, but was unable to match individuals such as Sylvanus Windrunner, Arthas Menethil, and the Conclave. As one of the leading dreadlord forces he is of the same league as Mal'Ganis. Comparable to Tirion Fordring, who had sacrificed his life to defeat him).

Speed: At least Subsonic (Managed to escape from Sylvanus Windrunner, who could keep pace with Arthas Menethil).

Durability: City level (Survived an onslaught against Illidan Stormrage and his allies, albeit with extremely heavy injury). 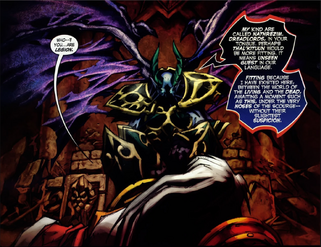