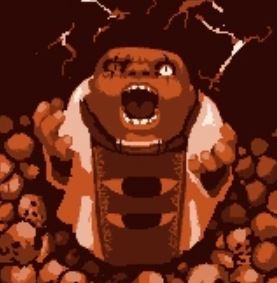 When Ballos was younger, he possessed magical powers and, along with Jenka, his sister, they helped the people in their land. This led to them becoming popular amongst everyone who lived in the kingdom, even more than the king himself. Seeing this led the king to become jealous, and so he imprisoned and brutally tortured Ballos. Eventually he could not control his overwhelming magical powers anymore, and went on a rampage, destroying the entire kingdom and unknowingly slaughtering his own wife and children. Due to this, he was exiled to the floating island, where he created the Demon Crown. He resided in the Seal Chamber until in the true ending of the game, Quote and Curly Brace came to defeat him.

Attack Potency: At least Small City level+ (Stronger than The Doctor, fought against both Curly Brace and Quote at the same time. Laid waste to an entire kingdom with ease)

Striking Strength: At least Small City Class+ (Can damage Quote and Curly with his physical strikes)

Durability: At least Small City level+ (Can take numerous hits from Quote and Curly, invulnerability makes him hard to kill)

Stamina: Very High (Withstood being brutally tortured for what is implied to be a long period of time)

Intelligence: Ballos is a very skilled combatant who is proficient in the use of magic.

Weaknesses: Ballos is both insane and somewhat suicidal, leading him to make irrational decisions at times.