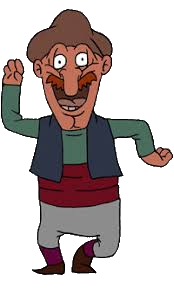 Balgar (Българ) is a good-natured Bulgarian that belives in eternal friendship. He is a main character of the Bulgarian satirical/parody animated web series Balgar, created by Nedelcho Bogdanov and set in the town of Nessebar.

Powers and Abilities: Superhuman Physical Characteristics, Adept Swordsman, Resistance to Magic (Resisted to the Evil Wizard's magic and forced him to harm himself)

Attack Potency: Wall level (Equal to Asparuh and was standing on par with Boris)

Retrieved from "https://vsbattles.fandom.com/wiki/Balgar?oldid=5010021"
Community content is available under CC-BY-SA unless otherwise noted.