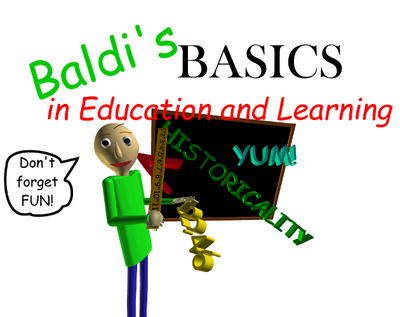 For detailed information about this series, visit the Baldipedia.

Baldi's Basics in Education and Learning is a quick Indie Horror Game that was put together in a few days for a contest. It first presents itself as an old edutainment game from the 90s, which quickly turns into horror. The game follows the player, who is presumably a student, as they collect notebooks that were forgotten by their friend around the school, while running from Professor Baldi, an evil teacher with a meter stick.

This verse's characters range from Tier 10 to Tier 9, with Average to Superhuman speed. Hax is not very prominent in the game, aside from Enhanced Senses (Baldi has the ability to hear doors opening and closing from across the building, and the sound of students doing math wrong), and the various items that the Player can use to deter the enemies.

Start a Discussion Discussions about Baldi's Basics in Education and Learning