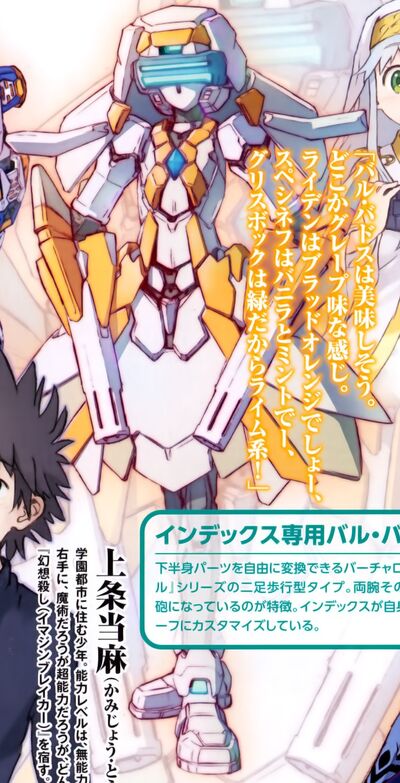 The Bal-Bados used by Index in the crossover between Toaru Majutsu no Index and Virtual On. Bal-Bados is a Virtuaroid, a robot built as materialized data used as part of Virtual On, a popular next generation game in Academy City.

Bal-Bados is a bizarre mid-sized Virtuaroid that can separate its launchers from its body to attack from different angles. It can pummel its opponent with highly seeking mines and highly negating ring beams. Its complex attack method requires a lot of skill to use it well, but if it can place its separated launcher in its opponent’s blind spot, it can gain a great advantage in battle. This particular Bal-Bados has been heavily customized by Index (as it's obvious by its appearance) and focuses in balance, light weight and speed to compensate for the Bal-Bados default mobility not being all that great.

Powers and Abilities: Superhuman Physical Characteristics, Statistics Amplification (Can use repulsion to boost his speed and dodge attacks), Energy Projection (Can use energy beam launchers that can separate from its body and hover independently to attack from different angles)

Attack Potency: At least Building level (Stray shots from even the weakest Virtuaroids are capable of bringing down Academy City's buildings)

Durability: At least Building level (Virtuaroids can tank several blows from other Virtuaroids without being destroyed)

Intelligence: The intelligence of the person using it

Weaknesses: Using the repulsion dash too much can overheat it

Retrieved from "https://vsbattles.fandom.com/wiki/Bal-Bados_(Toaru_x_Virtual_On_Crossover)?oldid=5545981"
Community content is available under CC-BY-SA unless otherwise noted.