Baiken (梅喧, Baiken) is one of the few characters of Japanese descent in the Guilty Gear fighting game series (others being May and Anji Mito). Baiken was a hidden character in Guilty Gear but became a normal character in later installments.

Age: Unknown, assumed to be quite elderly

Powers and Abilities: Superhuman Physical Characteristics, Skilled Swordswoman (Is also proficient with other weapons), Ki Manipulation, Can use magic to summon tatami mats, Information Manipulation, Non-Physical Interaction (Able to hit souls), Awakened Power (Awakened her power to defeat I-No in her bad ending), Resistance to Diseases (Unaffected by the effects of Information Flare to Japanese)

Attack Potency: Multi-Continent level+ (Eddie stated that they are comparable, battled a held back Anji and Answer for an extended period of time) | At least Multi-Continent level+, possibly Universe level (In one of her endings, after awakening her power, she was able to defeat and kill I-No)

Intelligence: Skilled fighter, incorporates various weapons into her fighting style along with magic and ki, which is very impressive considering how she is essentially a regular human by Guilty Gear standards.

Weaknesses: Has lost the use of her left eye and right arm, although this doesn't seem to greatly impede her in battle. 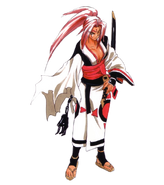 Baiken in Guilty Gear XX Λ Core.
Add a photo to this gallery