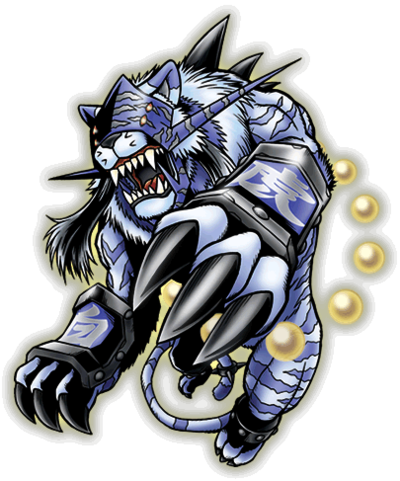 Baihumon is a Holy Beast Digimon whose names and design are derived from the mythological White Tiger of the West (白虎 Bái Hǔ?), known in Japan as "Byakko" (びゃっこ?). It is the "Digimon Sovereign" that guards the West, and commands the Deva Makuramon, Sinduramon, and Caturamon. Also, although it is the youngest of the Sovereigns, its power is the greatest among the four. Baihumon is a neutral being just like Azulongmon, and it isn't someone who will generally become an ally. The characters on its vambraces read "White Tiger" (白虎 Bái Hǔ?)

Gender: Genderless, but regarded as Male

Attack Potency: Complex Multiverse level (One of the Four Holy Beast, responsible for creating a layer that transcends almost all levels of existence of the Digital World, being below only Yggdrasil. Its own existence composes part of the Digital World Balance, thus maintaining the balance in the whole Multiverse, and in case its power decreases, the Multiverse will collapse. Explicitly said to be the most powerful member of the Four Holy Beasts)

Speed: Immeasurable (Should be as fast as Megidramon)

Intelligence: As one of the most ancient beings in the Digital World, Baihumon is extremely knowledgeable about its workings and is responsible for maintaining its harmony. Although he is the youngest of the Sovereigns, he is recognized as the strongest among them, implying that he is the most combat-ready of them all, attacking foes with spontaneously created balls of metal before tearing his foes apart with his claw and spiked tail ring. He is also pragmatic enough to simply turn his opponent into a bronze statue and leave them to rust away. However, he is also somewhat proud and arrogant, refusing to make allies under normal circumstances and underestimating his opponents as was the case with the D-Reaper.

Weaknesses: Somewhat arrogant. It's Digicores are out in the open.