VS Battles Wiki
Register
Don't have an account?
Sign In
Advertisement
in: Characters, A Will Eternal, Male Characters,
and 41 more 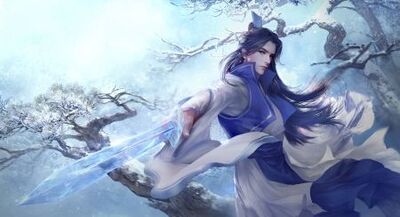 Upon the destruction of the Heavenspan Realm, his home, as an aftermath of his battle with Daoist Heavenspan, Bai Xiaochun wakes up in the Eternal Lands, disheartened and lost. After months of drowning himself in drink, he is found by his father-in-law. Spending some time wallowing int their grief, the subsequent talks allow him to rebuild his Dao Heart, finding it within himself to save the remnant people of Heavenspan and give them a future. One where his friends would stand by his side forever, free from the fighting and killing that plagued cultivators.

Age: ~70 | ~130 | ~190 | Old enough that he witnessed human civilization evolve naturally from before even bacteria existed

All previous, Celestial Cultivation, Resurrection, Sealing, Paralysis Inducement, Transmutation, Memory Manipulation through Former Will (Can turn memories into seals that seal the victim and resurrect himself from nothing but his past. Can also view and absorb those memories), Immortality (Types 1 and 4), Time Stop, Life and Death Manipulation through Present Will, Attack Reflection and Fate Manipulation with Future Will (Can share or reflect any damage sustained with a target by connecting their fates to make them take damage in their stead), Time Manipulation and Gravity Manipulation (Can manipulate gravity to slow or accelerate time in a certain area)

All previous, Archean Cultivation, Aura (Immensely intimidating aura that makes him appear as powerful as a Sovereign), Summoning (Can summon a projection of the Immortal Realm, a realm thousands of times larger than the Eternal Flower, to crush his enemies), Statistics Amplification (With 5 Yin organs)

All previous, Sovereign Cultivation, Duplication (Has 1,080,000 perfect copies of himself and each can explode into a host of dandelion seeds), Invulnerability (Each of their defenses and attacks contain Essence, making them immune to any normal attack), Improved Conceptual Manipulation and Law Manipulation (Each of his punches contains all kinds of natural laws, Essences and Daos), Fusionism (Fused with the ruins and leftovers of several dead worlds, revitalizing them Can fuse with his Dao Clones to obtain their power on top of his), Immortality (Type 8) (As long as any of the clones or worlds he created are intact, he can keep coming back), Pseudo-Time Travel and Duplication (Creates a mirror image of the river of time, creating an exact copy of reality in the past or future, even containing beings unbound by space and time. Wounds received in this duplicate world remain in the real one too), Size Manipulation (Could easily grow large enough to hold 1,080,000 dimensions with starry skies in the palm of his hands or small enough to be held in someone's hand), Regeneration Negation (Mid-Godly) With Finger of Allheaven

All previous abilities to boundless new heights, Beyond Transcendent Cultivation, Improved Reality Warping and Space-Time Manipulation (Could reduce the entire universe to a dimensionless singularity then add 3 infinite-sized spatial dimensions and time and view all past, present and future at once from an outsiders perspective), should have all of Meng Hao's abilities and resistances aside from the 9th and 10th Hex

Attack Potency: Multi-Galaxy level (Can keep up with Archaeans, albeit barely, who are comparable in power to a weapon that can destroy entire galaxies in a single shot) | Unknown, at least Multi-Galaxy level (With his Will Core sprouting, he became incomparably stronger than before. Had enough power in him to re-fill and recreate 1,080,000 dimensions with their own starry skies) | At least Multiverse level (Far superior to even other peak 3rd Step cultivators, who are comparable to a weaker Ancient Realm Meng Hao, who could shake the entire Vast Expanse. Said Vast Expanse being endless to beings that can hold universal space-times within themselves and containing countless vortexes large enough to hold these creatures. Are unfathomably superior to all other 3rd Step cultivators), higher with Dao Clones (for every realm, worlds with their own stars and laws of reality, that they fill with life, he gains power equal to his base. They have filled 1 080 000 worlds with life, increasing his power by equal amounts), Outerverse level with Finger of Allheaven (Uses the Essence of the Eternal, which is at least at the 4th Step and could form something halfway into the 5th step) | Outerverse level (Is a 5th Step cultivator, who are described as viewing all The Universe and its Transcendent cultivators as a painted image such that whatever form the painting takes, whether a human or a Transcendent cultivator, is equally irrelevant in their eyes. The breakthrough to this "other dimension" is described as a dream being conjured out of thin air and a painted image becoming real, viewing The Universe and its 4th Step cultivators as an illusion)

Speed: At least Massively FTL+ (Far faster than before), Immeasurable with Godkiller | Massively FTL+ (Faster than all of his previous speed amplification could make him, which is over ten times as fast), Immeasurable with Godkiller | Immeasurable (Can move to and fro through the flow of time with sheer speed and is in the same league as cultivators who can fight from the present to the past and throw attacks to the future. Should be much faster than Spatial Bending, something common to 2nd Step cultivators) | Nigh-Omnipresent normally, Omnipresent in his own territory

Range: Interstellar (Can affect all of the Immortal Lands, which are thousands of times larger than the Heavenspan Realm) | Intergalactic (Comparable to weapons that can annihilate galaxies) | Multiversal | Irrelevant

Standard Equipment: All previous, Command Medallion (Can teleport to the Giant Fan and back once per day)

Weaknesses: In his Sovereign key, fatally wounding him costs him clones, which removes the extra power granted by that clone.

Time Immemorial Codex: A codex created by Bai, it represents his past, his present, and his eternal future through the manifestation of his will.

Undying Sovereign's Fist: After absorbing and connecting Undying Emperor's Fist to the fist/paw of a Sovereign level wolf, it became immensely stronger, containing sovereign level power and allowing Bai to amplify his power by an amount that he lost count of (but is more than 50). In it is combined the power of former and present will.

Starry Sky Furnace: Bends the universe itself to act as a furnace, "burns" time as fuel, and the opponent is the ingredient that will be refined into a beneficial pill. This would have worked on a being that is Nirvanic Death (a kind of death outside of the life and death cycle, only living eternal "peace" to all things affected by it) incarnate, regardless of his Will or Essence.

Dao Clones: Copies of him in body, soul, mind and concept, there is one for every realm (worlds with laws and "starry skies" of their own) they fill with life, and each stacks onto his power when they fuse. He has 1,080,000 such clones in his Sovereign key, but can create more. If he is fatally harmed clones will die in his place. "Fatally harmed" includes things such as his Finger of Allheaven, tough that cost 8 clones for Mortal Renegade to survive.

Finger of Allheaven: By channeling the Essence of Eternal, Bai erases the enemy in body, soul, mind, Will and even their essence. If they were to somehow come back, they will keep getting erased and weakened until they die permanently.