VS Battles Wiki
Register
Don't have an account?
Sign In
Advertisement
in: Characters, Bionicle, Acid Users,
and 17 more 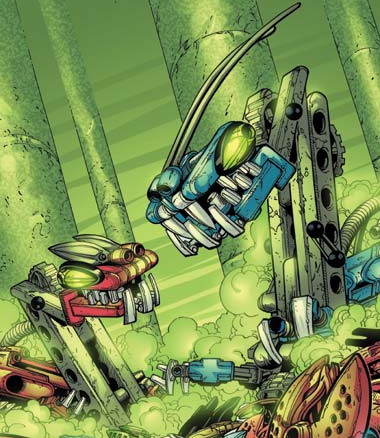 The Bahrag, Cahdok and Gahdok are the queens of the Bohrok Swarm. They were created by the Great Beings with the purpose of leading the Bohrok on their duty of wiping out Mata Nui's surface in preparation for the Great Spirit Robot standing up.

Classification: Queens of the Bohrok Swarm

Attack Potency: Mountain level (Alone, either of the Bahrag can contend with three of the Toa Mata in Exo-Toa, and together, they're far superior to all six of them, even after they shed the armor to use their elemental powers).

Lifting Strength: At least Class 1 (The average Toa is able to lift over 1 ton), likely at least Class 100 (Onua Nuva lifted a boulder, as have other Toa and beings on their level) or at least Class M (Roodaka once ripped Krahka, in the form of a Troller, a giant Rahi who can fit a city block in its mouth, from the ground with a single hand)

Range: Extended melee range, Kilometers with their abilities (Their range should be comparable to a Toa, such as Pohatu, who destroyed the massive Odina Fortress with a single timed Stone Blast), Planetary with telepathy (They can direct and control the Bohrok across all of the Great Spirit Robot)

Intelligence: Fairly high. The Bahrag have knowledge of the Matoran Universe, its workings, and can direct the Bohrok Swarms on their mission to wipe out Mata Nui's surface.