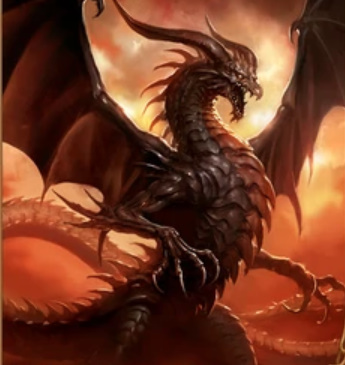 Bahamut is the name giving dragon for the series and the final antagonist.

Powers and Abilities: Invulnerability (No weapon made by the gods or demons is able to harm it which only one of it's own talons could), Large Size (At least Type 2), Breath Attack, Energy Manipulation, Explosion Manipulation, Fire Manipulation, Danmaku, Flight, Electricity Manipulation, passive Weather Manipulation (It's awakening alone caused massive storms), Natural Weaponry, Immortality (Type 1 and Type 4)

Attack Potency: Unknown (Casually destroyed a town with one of it's attacks. it took the combined effort of all the demons and gods to restrain its power and it casually destroyed holy land Eibos. Is said to destroy the world over time)

Lifting Strength: At least Class M (Can lift it's own weight)

Stamina: Very high (Implied to continue it's rage until the whole world is destroyed)

Intelligence: Low (Is constantly enraged and bent on destroying the world)

Weaknesses: Weapons made from its body

Retrieved from "https://vsbattles.fandom.com/wiki/Bahamut_(Rage_of_Bahamut)?oldid=5842193"
Community content is available under CC-BY-SA unless otherwise noted.