VS Battles Wiki
Register
Don't have an account?
Sign In
Advertisement
in: Tier 6, Tier High 6-B, Tier High 6-A,
and 49 more 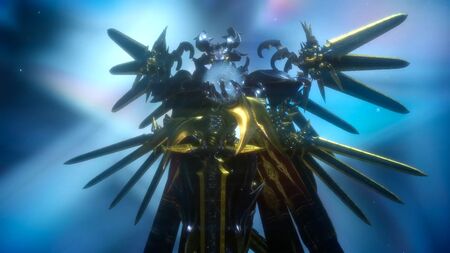 Bahamut, the Draconian, is an Astral in the Final Fantasy XV Universe. He is one of the Six and is the God of War clad in winged armor. Bahamut is said to have bestowed the powers of the Oracle and given the Ring of the Lucii and the Crystal onto his chosen king. He is the most mysterious of the six gods with the fewest mentions in written records.

Like the other Astrals, Bahamut is based on a recurring summon in the Final Fantasy series. He is one of the most prominent summoned monsters in the series and is typically considered the strongest among storyline summons.

Though he first appears to be an ally of Noctis Lucis Caelum and a benevolent deity in the base storyline of Final Fantasy XV, Bahamut is soon revealed to be the true villain of the game's expanded universe.

Name: Bahamut, The Draconian, The Bladekeeper

Age: At least billions of years old (It has been estimated that Eos came into existence some 4.5 billion years ago and the Astrals are far older than the planet)

Classification: Astral, Leader of the Astrals, God of War

Powers and Abilities: Superhuman Physical Characteristics, Immortality (Type 1, 3, 8 and 9, Astrals exist both in the physical realm and the Beyond and cannot be killed unless they're destroyed in both realms at the same time), Regeneration (Low-Godly, Astrals can regenerate their physical form if they're killed in the mortal realm as long as they still exist in the Beyond), Magic, Light Manipulation, Weapon Creation and Weapon Mastery (Can create swords made of light as well as a storm of blades. Created the Trident used by the Oracles), Holy Manipulation, Telekinesis, Energy Manipulation and Projection, Fire Manipulation (Via Mega Flare and Tera Flare), Matter Manipulation (Via Tera Flare), Absorption (Gave Ardyn the ability to absorb demonic energy into his own body to heal people. Absorbed Lunafreya's darkness to recharge and fuel his Tera Flare), Telepathy (Can mentally communicate with mortals and those who have recieved his power), Dream Manipulation (Interrupted Lunafreya's attempts to communicate with Shiva via her dreams and can communicate with mortals in the same way), Darkness Manipulation (Can channel the darkness to fuel his powers. Gave demonic powers to Lunafreya when he brought her back to life), Resurrection (Resurrected the dead Kingsglaive and later did the same with Lunafreya), Power Bestowal (Blessed the lineages of the Oracles and the Kings of Lucis), Healing (Blessed Ardyn and Lunafreya with the power of healing), Creation (Created the Ring of the Lucii and the Crystal), Spatial Manipulation and BFR (Can pull beings into his dimension like he did with Ardyn), Illusion Creation (Created an illusion of Aera to torment Ardyn), Duplication (Can create copies of himself in battle), Summoning (Can summon the other Astrals), Size Manipulation, Large Size (Up to Type 3), Self-Sustenance (Type 1, 2 and 3), Flight, Teleportation, Dimensional Travel

Attack Potency: At least Large Country level, possibly Multi-Continent level (Vastly stronger than all the other Astrals, including Ifrit whom he personally killed during the War of the Astrals. Was able to fight all the other Astrals, including Ifrit who can possibly burn the entire world with his flames and Shiva who killed Ifrit with a kiss, as well as Noctis as the True King of Light without much difficulties in the physical realm. His ultimate attack, Tera Flare, is powerful enough to wipe out all life on Eos. After Bahamut's death, all magic on Eos faded away, and the Astrals disappeared)

Speed: At least FTL (Can easily keep up with the likes of Noctis and the other Astrals like Leviathan or Ifrit who was able to dodge his attack in Insomnia)

Striking Strength: At least Large Country Class, possibly Multi-Continent Class (Is fully capable of killing all the other Astrals, including Ifrit whom he one-shotted with one of his swords and destroyed his physical body to protect Regis from Ardyn. Tera Flare is powerful enough to wipe out all life on Eos and even destroy the planet)

Durability: At least Large Country level, possibly Multi-Continent level (As an Astral, Bahamut can only be killed if he's destroyed both in the realm of mortals and in the Beyond at the same time. A combined assault from Shiva, Ifrit, and Noctis only allowed them to shatter his mask. It took the combined effort of all the other Astrals and the True King of Light to destroy his physical form while Ardyn had to summon all the old Kings of the Lucis and use all their power to kill him in the Beyond at the cost of his life)

Range: At least several meters to dozens of meters via sheer size, Planetary with powers and Tera Flare.

Standard Equipment: His Sword, Multiple Blades, and other weapons

Intelligence: Extremely High. Bahamut is an excessively cunning being who manipulated all the people on Eos to destroy the Starscouge. He tricked Ardyn by giving him the ability to absorb demonic energy into his body so he could turn into a demonic being and play the role of a sacrificial lamb destined to spread the Starscourge, being killed by the True King. He blessed two bloodlines with his powers so he could use them to destroy the darkness, thus manipulating the entire conflict between the Light and the Darkness on Eos. In Dawn of the Future, he managed to manipulate Lunafreya by giving her the same healing powers he gave to Ardyn to make her absorb darkness, intending to use it to fuel his Tera Flare and wipe out all life on Eos.

Weaknesses: He is particularly arrogant and quite ruthless. Views mortals as nothing but pawns in his plans and doesn't care about their behavior. Needs to recharge his Tera Flare for millennia if it is interrupted. Will be genuinely destroyed if he's killed in the physical realm and the Beyond at the same time.