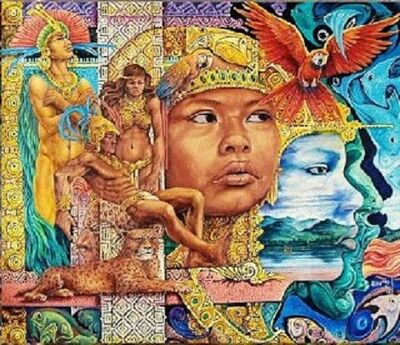 Bague is the Great Creative Mother of the Universe in Muisca mythology. She is the intangible, she is the thought, imagination and strength that came. In Her and in her thinking, there is everything that exists today. In the time of unquyquie nxie, when Bague thought, his thought became a work. Before this there was nothing. Thus Bague, the great grandmother created the makers and trainers of the universe and gave them the order to begin the creation of the universe.

Powers and Abilities: Superhuman Strength and Durability, Immortality (Type 1), Intangibility, Creation (Created other deities), Conceptual Manipulation (Created the concepts of Life and Death), Weather Manipulation (Should have the same ability as the gods she created), Omniscience, Power Bestowal (Bestow different kind of powers to different gods)

Attack Potency: Universe level+ (The great grandmother created the makers and rulers of the universe , like Chiminigagua who created space and time)

Intelligence: Omniscient. She knows literally everything in her mythology.

Retrieved from "https://vsbattles.fandom.com/wiki/Bague_(Mythology)?oldid=6874438"
Community content is available under CC-BY-SA unless otherwise noted.