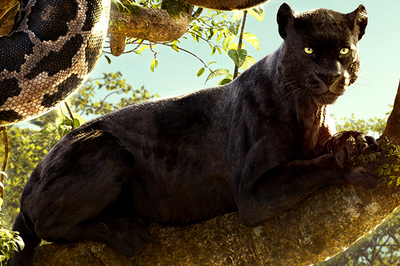 Bagheera is one of the main protagonists of the 2016 Jungle Book movie. He is a black leopard who had brought Mowgli into a wolf pack to be raised amongst them. Years later, the panther would always try to help Mowgli against the danger of Shere Khan.

Age: Unknown, mature for a leopard

Attack Potency: Street level+ (Can momentarily hold his own against Shere Khan. Should not be much weaker than real-life leopards)

Speed: Superhuman (Real leopards can run around 30-35 MPH, Bagheera was able to catch up to Shere Khan)

Intelligence: High (Constantly trained Mowgli to be able to run with the wolves, knew Mowgli would be in danger as long as Shere Khan was around)

Start a Discussion Discussions about Bagheera (2016)