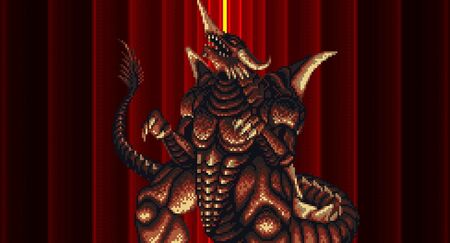 Bagan is an ancient super kaiju created by Toho that first appeared in the 1993 Godzilla game, Super Godzilla, and serves as the final boss of that game. Supercharged by cells from Godzilla and King Ghidorah that his alien commanders had spliced into him, Bagan is easily the most powerful foe in the game, being generally seen as impossible to defeat as normal Godzilla, and is still a difficult opponent for Super Godzilla...

Speed: At least Supersonic+ (Scaling from Godzilla who killed Super Sonic Battra in this game)

Range: Tens of meters by sheer size, Hundreds of meters to dozens of kilometers with ranged attacks

Intelligence: Average. Bagan was the ruler over land, sea, and air in ancient China.