VS Battles Wiki
Register
Don't have an account?
Sign In
Advertisement
in: Tier 9, Tier 9-A, Tier 7,
and 34 more 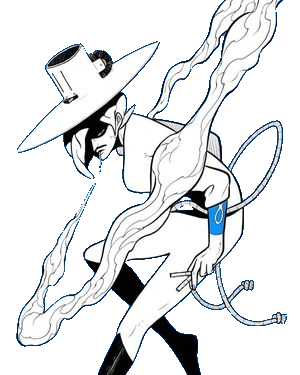 Baekseo of Cigarettes is a Black Reaper and the leader of the Asian Branch Team 2 and is known as the Top Guide Reaper as well as the "best in the Netherworld" due to possessing far superior levels of Dark Power than all other reapers and ghosts with the exception of Jusa. His legacy reaches so far and wide that the sole reason why people in the living world tell others to never smoke, aside from the health risks, is due to fear of his strength and status.

Powers and Abilities: Superhuman Physical Characteristics, Flight, Regeneration (Low-Mid), Enhanced Senses, Martial Arts, Smoke Manipulation, Fire Manipulation, Explosion Manipulation, Immortality (Types 1, 2, 3, and possibly 5; Those within the Underworld are unable to conventionally die and must be Eternally Destroyed in order to be rid of), Incorporeality (Possesses a similar trait to ghosts who do not possess a physical body), Afterimage Creation, Precognition, Self-Duplication (Can create clones of himself made of smoke), Energy Manipulation, Non-Physical Interaction, Psychometry (Can access the memories of Blackboxes that remain after Eternal Destruction), Self-Sustenance (Type 2), potentially Disease Manipulation (Can induce various lung-related disease), Transformation, Size Manipulation, Body Control, Biological Manipulation, Matter Manipulation and Creation with External Transformation. Existence Erasure via summoning the Oganis (Can summon the Oganis and enact Eternal Destruction on a particular individual, erasing them from existence), Soul Manipulation, and Fate Manipulation (All Reapers possess the ability to pluck the soul out of a living individual which results in the individual being fated to die, occasionally by cardiac arrest or brain seizures). Resistance to extreme pain, Disease Manipulation involving the lungs, Heat Manipulation, Biological Manipulation and Matter Manipulation (Can resist applied effects of External Transformation from weaker individuals or those with less Dark Power or stamina), and Fire Manipulation | All previous at a greater degree, Statistics Amplification and Statistics Reduction, minor Perception Manipulation with Whiten (Bleaches all surroundings from "color", reducing all nearby individuals and objects to the same level of "status" and equalizing all individuals' strengths and also status within the eyes of all affected individuals due to nature of color attributing to strength of Dark power and therefore strength). Resistance to Social Influencing with Whiten (Also granted to individuals under the influence of Whiten)

Attack Potency: At least Small Building level (Described to be a hundred times stronger than an average ghost. Can severely harm Underworld Lawmakers such as Johnana Watonker. Can destroy large portions of the Reaper HQ building), higher with the Bone Pipe | At least Town level (Nearly destroyed the Reaper HQ. Can severely harm Johnana Watonker who is equal to Sheville Warhand. Far stronger than previously), higher with the Bone Pipe

Weaknesses: Using the Bone Pipe twice will eventually kill him. The Fire Iron stage of Chainsmoker Mode will result in his body being incinerated.

Transformation: A basic technique in which the user is able to transform parts of their body. Users are able to freely modify parts of his body at the expense of stamina as well as detach parts of his body, modify them, and utilize them as weapons.

Ember Flicking: Baekseo can fire burning embers out of his cigarettes at high speeds and like bullets.

Tobacco Fist: Baekseo punches his opponent with lit cigarettes wedged between his fingers to pummel his opponent while causing slight burns.

Smoke Link-Verse: Baekseo exhales a large column of smoke that is confined to a particular area. Individuals within this area will normally find major difficulty breathing, will have their sight obscured, and may develop various lung-based diseases.

Fires of Hell: Baekseo uses the lighter in his possession to generate a large fireball.

Major Transformation: Chainsmoker Mode: A technique that involves great usage of External Transformation that allows Baekseo to utilize his full power. Baekseo transforms his lighter, places it around his neck, and lights himself, greatly increasing his physical and mental capabilities at a level comparable to using the Bone Pipe while casting a variety of ailments to those near him.

Bone Pipe: An artifact passed on by generations of the House of Tobacco. When smoked, the user's physical and mental capabilities will multiply but the user will be killed upon second usage while severely damaged upon the first usage.