VS Battles Wiki
Register
Don't have an account?
Sign In
in: Statistics Amplification Users, No More Heroes, Psychopaths,
and 42 more 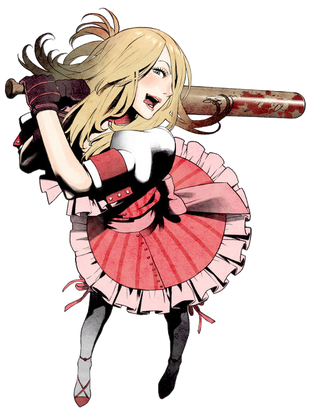 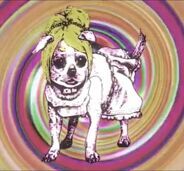 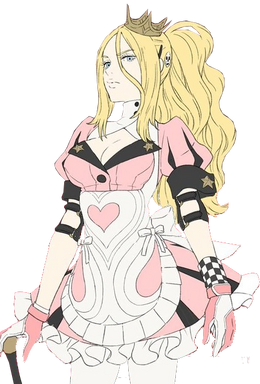 Bad Girl is the 2nd Ranked assassin in the Original No More Heroes. A complete and utter psychopath, she hangs under the basement of a baseball stadium killing clones on a conveyor belt with a baseball bat, viewing it as some sort of job. She gives Travis what he'd later describe as one of his top three hardest fights, overpowering him and almost killing him after what he thought would be a killing blow, though eventually bleeding out.

In Travis Strikes Again, or rather, its Travis Strikes Back, she is revealed to be the daughter of Badman, and that she'd been abused into insanity by his superior once he realized she'd likely have even more potential than him. Badman attacks Travis, seeking to get revenge for her death, but the two are sucked into the Death Drive Mk II Travis was playing with, and decide to use its wish-granting abilities to revive her. They succeed, but one of the Death Balls necessary for the wish turns out to have been a fake, so she is instead revived as a small dog called Bad Dog, until the DLC, where Travis finds the actual Killer Marathon Death Ball, and they manage to revive her in a more successful way, though her and Badman realize they have little in common anymore, and part ways without any words.

Superhuman Physical Characteristics, Statistics Amplification (Can light her baseball bat on fire to increase damage and cause a shockwave when she hits the ground), Fire Manipulation, Weapon Mastery, Instinctive Reaction (Stated to be moving purely on instinct, and to have the same instincts as her father, Badman, but more potential), Awakened Power and Berserk Mode (Can turn berserk and awaken her hidden power when in near death), Shockwave Manipulation, Limited Resistance to Electricity Manipulation (Survived several near-deadly shocks in a row), Non-Physical Interaction and Resistance to Heat Manipulation for her weaponry (Her bat is able to clash with Travis' Beam Katana and can stay aflame for long periods of time with no effect despite being made of wood), Cloning and Summoning with her cloning machine

Same as No More Heroes 1 minus Cloning and Summoning, plus Empowerment (Via leveling up. Furthermore, the more she kills, the more she does damage, eventually building up enough power for an AOE attack), Data Manipulation, Reactive Power Level (Her weapon's power will grow with multiple hits), Non-Physical Interaction (Can hit data and bugs), Resurrection Negation (Killed Brain Buster Jr. who couldn't die because of continue system), Teleportation (Can teleport back to her original position when falling into a pit), Electricity Manipulation via Wing Chip, Absorption with Dendrobium Chip (Drains nearby characters’ stamina to fuel an attack), Thread Manipulation via ∞ Justice Chip, Afterimage Creation via F91 Chip, Energy Manipulation via Strike Freedom Chip (Calls a guided laser from an orbiting satellite), Explosion Manipulation via Physalis Chip (Spreads gas that can be lit for an explosion), Double X Chip and Atlas Chip (Throws a sticky bomb), Weapon Creation (Turrets) via Crossbone Chip, Telekinesis via Shining Chip, Time Manipulation via Heavy Chip (Slows down time in an area), Gravity Manipulation via Self Chip (Pulls enemy towards the center of an area), Healing via ∀ Chip (Heals self and allies in an area) and Unicorn Chip (Sucks life from surrounding enemies), Invisibility via Ξ Chip, Forcefield Creation via Destroy Chip, Status Effect Inducement via Psycho Chip (Briefly paralyzes targets while damaging them), Resistance to Extreme Temperatures (Unaffected by the first stage's -20 degrees despite her light clothing. Can walk around the Moon, which reaches temperatures up to 127 C when lit by the sun), Poison Manipulation (Can survive exposure to Sheepman Green's poison clouds) and Time Manipulation (Can move normally in Yojohan where time moves backwards)

Avatar Creation (Charlotte's self within the DDMk-II is only a videogame avatar), Resurrection and Time Manipulation (Only within the Death Drive Mk II, Shinobu can load a save file upon death, as it is just a videogame to her. She can save on toilets, then quit and load to resume from that point. Furthermore, she is equipped with two lives she can use to resurrect on the spot), Statistics Reduction and Statistics Amplification (by changing the game's difficulty, which is something that's canonically at her disposal)

Stamina: Incredibly High (Likely superior to Travis as she managed to outlast him, beating on him even though she was dying and exhausted, enough for him to pass out after the battle), even higher with Instinctive Reaction (At least equal to Badman, who was able to stand up and fight while unconscious from head trauma) | Unknown | Incredibly High, even higher with Instinctive Reaction

Range: Extended melee range. Several meters when batting clones towards Travis and with shockwaves | Below Standard Melee Range | Same as her first key, dozens of meters with Death Glove

Intelligence: Above Average. Despite having no formal training, Bad Girl is an incredibly skilled fighter, having given Travis what he described as one of his toughest fights, and quickly and effortlessly rose through the UAA's ranks before fighting him. | Below Average. Only able to bark out a few words and seemingly unintelligent | Above Average. Bad Girl has gotten back her fighting prowess, although she appears to be a bit more childish than before her death.

Standard Tactics: Will sometimes lie down to the ground and pretend to cry to bait her enemy into a deadly combo of attacks. Sometimes, she will simply cry instead.

Weaknesses: Insane and almost permanently drunk. Prone to crying fits in the middle of battle, though they are often an attempt to bait her opponent into lowering their guard. | A weak dog with no abilities whatsoever | Her abilities exclusive to within the Death Drive are reliant on her being in a videogame, albeit a supernatural one, and thus they cannot be replicated in real life.