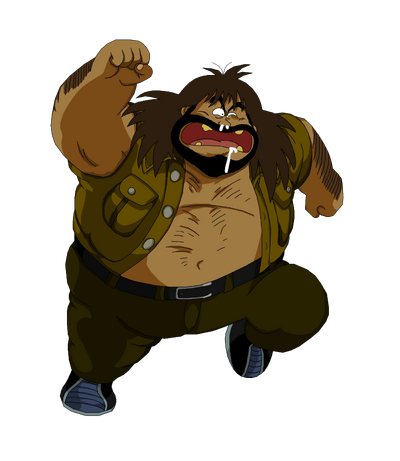 Bacterian is a large, filthy man who competes in the 21st World Martial Arts Tournament. He is a homeless man who has never once taken a bath or brushed his teeth in his entire life. He uses his filth and odor to give him an advantage in battle, making it so that his opponent has to hold their nose, leaving them with only one hand to fight.

Powers and Abilities: Superhuman Physical Characteristics, Fragrance Manipulation (His body odor was rancid enough that those within close proximity of him need to wear gas masks)

Attack Potency: Wall level (Having been in the quarter-finals of the 21st Budokai, he should at least be comparable to Giran)

Striking Strength: Wall Class (Should at least be comparable to Giran)

Durability: At least Wall level (Survived being knocked back from a kick by Krillin)

Intelligence: Low (Is constantly laughing, doesn't talk much, and when he does, it's done with a rather limited vocabulary and poor grammar, ex; "I miss you, tricky. Now, I've got some trickies too" and "You made me hurt")

Standard Tactics: Bacterian mainly relies on his smell to fight. He uses his stench so that his opponent has to hold their nose, enabling them to only fight with one hand. Most of his attacks are related to his filthy state. His tactics include farting on the opponent, spitting mucus filled saliva on them, breathing on them, and even touching them with his finger after rubbing his groin. Apart from his stench, he also uses his weight and strength to his advantage. He is known for crushing his foes with his weight and strangling them. He likes to torment his opponents, and is very ruthless in this regard. As shown against Tambourine, when fighting a stronger foe that his smell has no effect against, he becomes desperate and starts flailing around in an attempt to defend himself.

Weaknesses: Not much of an actual fighter