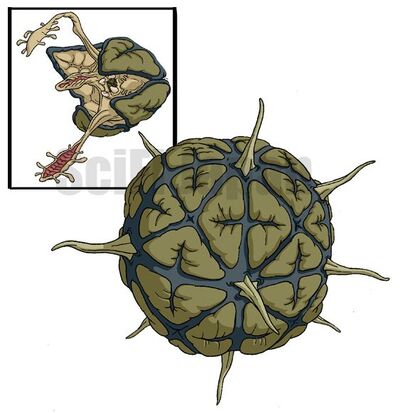 A mutated germ that attacked the outskirts of New York City, the massive Bacillus gained the attention of H.E.A.T. and Godzilla. A battle between the germ and the monster king began and the two went at it non-stop. In the midst of the battle, Bacillus sliced open Godzilla and injected its own mutated bacteria. In response, the monster king tossed the creature away, causing a wave of green goo to splash on Craven, also infecting him. Before the bacteria took a full effect on Godzilla, he dragged Bacillus away and unleashed his atomic fury, but the germ quickly formed its endospore barrier, protecting itself from the beam and vanishing beneath the waves, making H.E.A.T. believe it be dead.

Godzilla and Craven now suffered hard from the infection. While Elsie generated a cure for Craven, Nick and Monique actually headed into Godzilla's body armed with lasers to take down the infection head-on.

Just as Craven was fixed up, Bacillus returned and was heading straight for the New York City water supply where it could infect the whole city. With Randy using the Heat-Seeker to keep the germ away, the pair inside Godzilla finished off the last of the infection, reviving Godzilla.

The monster king quickly rose to the surface to due battle again. Before the battle could begin yet again, however, Craven, now immune to the bacteria due to the antidote, drove a speed boat loaded with a barrel of the antidote into the germ's gapping maw. Jumping out just in time, Craven watched on as the mutated germ began to dissolve. Godzilla finished off the creature with his atomic fire, and this time it was unable to successfully use its endospore barrier. Bacillus was finished, and the monster king sneezed out both Nick and Monique, ending the day in a happy tone.

Attack Potency: City level (Bacilus' is strong enough to hold and  go through Godzilla's skin in battle), Can ignore conventional durability with Infection

Durability: City level (Can survive some hits from Godzilla), possibly higher with endospore (Protected the Bacilus from Godzilla's Power Breath)

Retrieved from "https://vsbattles.fandom.com/wiki/Bacilus?oldid=5456415"
Community content is available under CC-BY-SA unless otherwise noted.