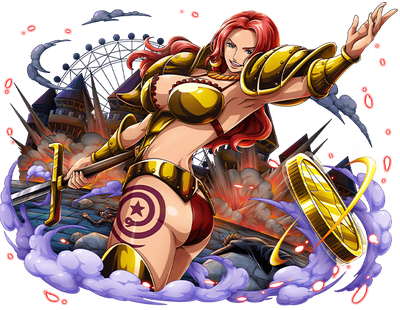 Baccarat is a concierge on Gran Tesoro and an executive member of Gild Tesoro's crew. She appears in One Piece Film: Gold.

Powers and Abilities: Superhuman Physical Characteristics, Basic Swordsmanship, Supernatural Luck and Probability Manipulation (By simply touching another person, Baccarat will absorb that person's luck to the point where it will become extremely unlucky, as multiple bad occurrences will immediately happen to them. Once she has absorbed other people's luck, she becomes so lucky that she is almost invincible, since any attempt to hurt her will end in failure and may even use simple objects such as coins to cause accidents that will hurt her enemies).

Durability: Unknown, likely Small City level+ (She was still conscious even after receiving an attack from Usopp), her supernatural luck makes difficult to be affected.

Range: Extended melee with her sword, higher with Raki Raki no Mi (Can make anything unexpected happen to attack opponents even from afar).

Standard Equipment: An armor and a golden sword, a coin.

Intelligence: High (She managed to deceive Nami and all the mugiwaras with high precision. She is a Tesoro hostess and helps her in her goal, seducing the casino players to make high stakes and using her powers to make them lose and stand apart).

Weaknesses: Standard Devil Fruit users weaknesses. The effect of his power is temporary on the opponent.

Raki Raki no Mi (Luck-Luck Fruit): She ate a devil fruit of the paramecia type that allows Baccarat to steal all the luck of a person, leaving them extremely unlucky. The stolen luck is absorbed by Baccarat, leaving her exaggeratedly lucky, to the point of being able to defeat opponents just by throwing a single coin on the ground. This power is also automatic and she does not seem to have control over it, so much that she needs to use a glove to make contact with people without stealing they luck. She can induce unlucky into enemies by causing them to fall to the ground by fall into shells of bananas that appear mysteriously, as well as making the enemy have some belly pain out of nowhere or anything that disrupts or knocks him out. She showed great mastery of the ability of her fruit, being able to defeat enemies just by throwing a simple and small object on the ground, like a coin. 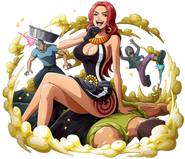 Retrieved from "https://vsbattles.fandom.com/wiki/Baccarat?oldid=5459946"
Community content is available under CC-BY-SA unless otherwise noted.