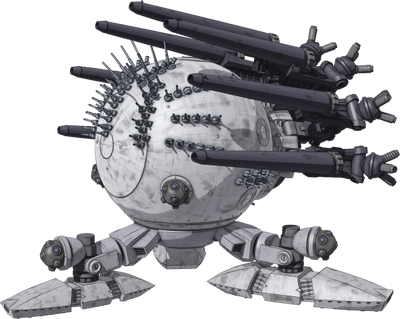 Tier: 7-B with main cannons, 9-A with individual Killer Squall lasers, at least 8-B with secondary weapons, 8-A by ramming at top speed

Attack Potency: City level with main cannons (Can damage and pierce through other Objects' onion armor, melt down a nuclear shelter hidden deep within the earth, easily wipe out an entire base in one shot or gauge half of a small mountain), Small Building level with individual Killer Squall lasers (Capable of vaporizing a human and burning off oil drilling cranes), at least City Block level with secondary cannons (Can sink battleships and aircraft carriers in one hit, a single railgun shot can bend an Aegis ship in two, a small coilgun can rip through multiple buildings, a small anti-personnel secondary laser beam cannon can melt a tank, Killer Squall fires hundreds of lasers), Multi-City Block level by colliding with a target at top speed (about 2.16*1012 Joules kinetic energy judging by its weight of 200 thousand tons and speed of 530 km/h)

Speed: Subsonic top speed (530 km/h), likely Hypersonic+ reactions (Can use its secondary cannons to easily intercept supersonic fighters and missiles, plus multiple Mach 5 and almost Mach 10 projectiles. It's been stated that Objects have basically driven ballistic missiles to extinction and that being able to perfectly intercept dozens of ballistic missiles scattered throughout the air is the bare minimum of what even an outdated 1st Generation like the Baby Magnum was designed to accomplish)

Durability: City level (Objects can tank a few direct hits from modern nuclear weapons, with modern Objects only having 20 or 30% of their weapons "distorted" and rendered unusable by a nuke)

Range: Over 20 km with secondary weapons, likely higher with main weapons (Except in plasma mode, which has a maximum range of 10 km)

Weaknesses: It needs to be equipped with naval floats to fight on the ocean or large bodies of water, and its electrostatic propulsion device can be temporarily disrupted by a powerful electrical discharge. After 10 kilometers (4 for its plasma cannons) its main cannons can no longer achieve city level attack potency, and secondary weapons are similarly weakened when fired at long ranges.