VS Battles Wiki
Register
Don't have an account?
Sign In
Advertisement
in: Variable Tier, Tier 9, Tier 9-A,
and 122 more

Baby (The Binding of Isaac) 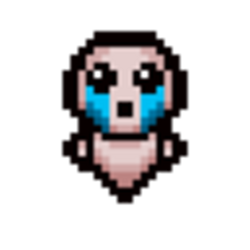 The Baby is the co-op player in The Binding of Isaac: Rebirth. It can take on many appearances and have various unique abilities, depending on which one is picked.

Superhuman Physical Characteristics, Flight, Water Manipulation (A baby's primary method of fighting is shooting his tears. Even without any items to upgrade them, he can fire almost three per second with several meters of range), Weapon Mastery (Capable of using tears, swords, and knives efficiently), Non-Physical Interaction (Can attack and destroy Dark Balls, which appear to be made of smoke, as well as Portals), Immortality (Type 2; Is capable of surviving dozens of impalements and injuries from items without being affected, such as Continuum, which completely hollows out his head, and Akeldama, which makes his innards trail on the floor behind him), Supernatural Willpower (Can withstand the aforementioned injuries as well as many more and fight while bearing them with no issue), Explosion Manipulation (Has access to bombs), Damage Reduction Negation (Bombs ignore damage scaling), minor Fusionism (Can replace any body parts with alternatives he finds, as seen with Lucky Foot or Guppy's Eye, Small Size (Type 0), Damage Reduction and Immortality (Type 8) with Soul Hearts (Soul Hearts absorb damage for the baby, and are able to keep him alive even when he would otherwise be dead as seen with ???, as well as other undead characters, who are unable to hold any other kind of heart), Energy Projection (When a Black Heart is destroyed, an instantaneous AOE attack will hit every enemy in the room), Life Manipulation and Soul Manipulation (When summoned, the baby will take some of the player character's health for itself), Resistance to Disease Manipulation and Fragrance Manipulation (Can expose himself to incredibly unsanitary and filthy conditions without any ill effect)

Attack Potency: Varies from Small Building level (Even without any items, Babies can reliably kill Chapter 1 bosses, who can survive explosive attacks, although they are significantly weaker than Isaac) to at least City Block level (Can fight bosses capable of withstanding Mama Mega by the mid-game, and can become much, much stronger than that thanks to the sheer amount of items and synergies available in the game, to the point of stomping even end-game bosses such as Delirium)

Speed: Subsonic, up to Subsonic+ with items (Comparable to their rocket bombs)

Lifting Strength: Unknown, up to Class M with items (Can suplex large enemies such as Mom)

Stamina: Extremely High. Capable of withstanding horrible punishment by items such as Akeldama or The Intruder and keep fighting.

Range: Several meters with tears, up to at least tens of meters with items and with Mama Mega