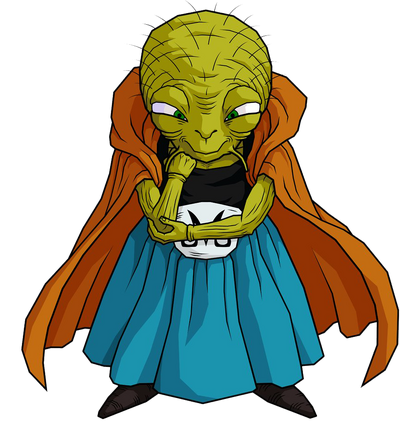 Babidi was determined to resurrect Majin Buu so that he could continue his "father" Bibidi's work, namely conquering the universe, and thus make him proud. Babidi took over the minds of Dabura, Pui Pui, Yakon, and Vegeta to help him in this cause. Babidi's mental abilities are very powerful, surpassing those of various mystical individuals who reside in Other World such as the telepathic King Kai. After Buu is released, Vegeta nearly kills Babidi when trying to destroy Buu. When Buu is seemingly destroyed, Piccolo bisects Babidi and leaves him for dead. After Buu revives himself, he finds Babidi who then orders Buu to revive him. Babidi orders Buu to kill Dabura, Shin, Gohan, Piccolo, Goten, Trunks, Vegeta (before his sacrifice) and whoever else stands in his way. As Buu is very disobedient, Babidi can only control him by threatening to seal him up. After an encounter with Super Saiyan 3 Goku, Buu learns that he is stronger than Babidi. Realizing this, Buu strangles Babidi (so Babidi can't say the spell to seal him up), and then punches his head off in rebellion.

Powers and Abilities: Longevity, Flight, Magic, Telekinesis, Teleportation, BFR, Forcefield Creation, Explosion Manipulation (Caused Spopovich to explode and exploded the head of a human who gave him useless information), Electricity Manipulation (Covered Piccolo in electric slime), Mind Manipulation (Only works on those with evil in their hearts), Statistics Amplification (Boosts the power of those he controls), Sealing (Only for Majin Buu), Reality Warping, Telepathy, Limited Energy Absorption with Energy-Suction Device (Must physically stab his target to drain them), Information Analysis with Energy Meter (Can read people's Ki in Kili), Limited Clairvoyance (Can view people with his Crystal Ball, but cannot use it to learn a person's location)

Stamina: Fairly high (Could survive for an extended period of time after losing an arm and both of his legs and could still use his forcefield in this condition)

Intelligence: Above Average. Clever and strategic, but often overconfident and underestimates both Buu and his enemies.

Weaknesses: Physically rather frail. Most of his spells require him to be able to speak (Buu stopped him from using his sealing spell by grabbing him by the throat). Word of God is that his forcefields are weaker against physical attacks than energy-based ones, pointing out how Piccolo was able to break it with his blows despite it protecting him from Buu and Vegeta's explosive waves.

Note: Babidi thinks of Bibidi as his father, but is really a clone created through magic. Him being Bibidi's son was retconned.