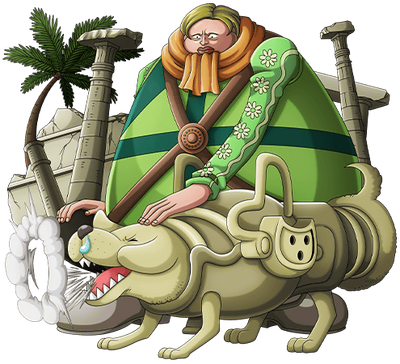 Babe, also known by his epithet "Catcher-Killing" and alias Mr. 4, is a former officer agent of the Baroque Works and the slow and dimwitted partner of Miss Merry Christmas. Due to his slow nature, he tends to acts as the muscle of the Mr. 4 pair. He rarely takes any initiative and is his partner the duo's driving force.He's very strong, able to wield a four ton baseball bat and has a bazooka named Lassoo which has (somehow) eaten the Inu Inu no Mi, Model: Dachshund, turning it into a bazooka-dog that sneezes explosives baseballs.

After the Alabasta's arc, he's captured but escapes before reaching Impel Down thanks to Miss Goldenweek and begins to work as a pizza delivery boy at the new Spider Cafe.

Power and Abilities: Superhuman Physical Characteristics, Bat user, his dog Lassoo has Limited Explosion Manipulation (Is a bazooka), Transformation (Can turn into a dog or a bazooka-dog hybrid), Enhanced Senses (Zoan users gain the senses of their respective animals)

Intelligence: Below average (He's extremely slow for everything, even taking damage).

Retrieved from "https://vsbattles.fandom.com/wiki/Babe_(Mr._4)?oldid=5018161"
Community content is available under CC-BY-SA unless otherwise noted.