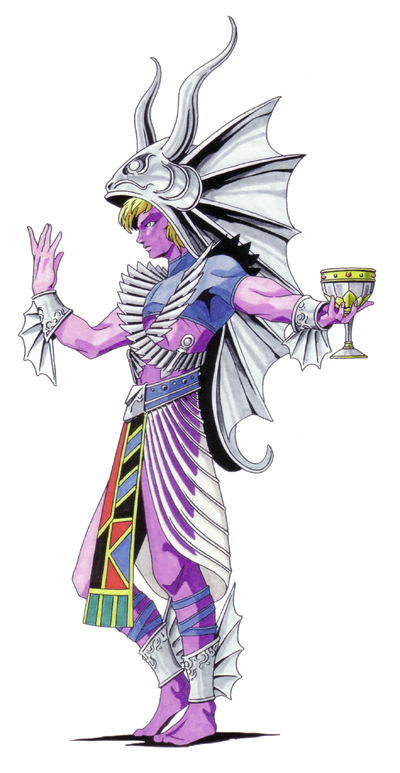 Baal Hadad is the Chief God of the Canaanite Pantheon and Consort and Brother of the Goddess Anat, associated with Fertility and the Rain and worshipped mainly in Ekron. It is said that various Demons are in fact Demonized Aspects and Derivations of Baal, most notably Beelzebub, who is the most direct result of the Bastardization of his stature as a Deity by Ancient Hebrews and their God, YHVH, distorting his Name and Image to transform him into a Demon

Age: Inapplicable. Demons are Eternal Beings who exist beyond Time and have always existed in spite of having been created by Human Observation

Powers and Abilities: Superhuman Physical Characteristics, Abstract Existence (Type 2), Immortality (Types 1, 3, 4 and 8. Can return to The Axiom to reform indefinitely), Conceptual Manipulation (Type 2), Regeneration (High-Godly. Capable of regenerating after being erased from nonexistence alongside the entire multiverse across past, present and future), Acausality (Type 4. Demons are naturally born in a world beyond time and do not perceive it linearly, being completely unaffected by the collapse of the multiverse across past, present and future), Non-Corporeal (As a Demon, Baal is not a physical being, and is a thought-form made of pure information and data, with the act of trying to kill a being such as him being linked to trying to slash the air or pummel the seas), Reality Warping, Space-Time Manipulation (Demon Gods infinitely inferior to Baal are capable of creating entire Universes as extensions of their beings in the Expanse, and freely manipulating them as they please, as well as collapsing them upon their deaths), Life and Death Manipulation, Matter Manipulation, Soul Manipulation (Demons are capable of destroying souls with normal attacks, as well as absorbing them and collecting the populations of entire cities to turn them into energy), Mind Manipulation (Should scale from Zelenin, who is capable of brainwashing most of the the population of the entire Planet into mindlessly worshipping God, while purging them of any and all thoughts not related to this, and of erasing the very urges to fight and do war from hearts of all Humans. Can also directly attack one's mind and induce complete panic upon it), Electricity Manipulation, Water Manipulation, Ice Manipulation, Earth Manipulation, Wind Manipulation, Weather Manipulation, Transmutation (Can turn an opposing foe into a fly, vastly decreasing their power while making them weak to Death Manipulation), Biological Manipulation, Forcefield Creation (Can erect shields in order to protect himself and his allies from Curse Manipulation, as well as Death Manipulation and Energy Absorption, nullifying the effects of such abilities, with Tetraja), Sealing and Power Nullification (Can seal away enemy abiliies), Summoning, Precognition and Clairvoyance (Demon Gods such as Baal are capable of viewing multiple futures and alternate Timelines from the outside, and of freely travelling and affecting things throughout Time and Space), Status Effect Inducement, Statistics Amplification and Reduction (Can vastly increase his own power while exponentially diminishing that of his foes, allowing him to make himself comparable or superior to someone who was otherwise far stronger), Resistance Negation (Can bypass innate resistances and magical barriers with Almighty Attacks), Resistance to Conceptual Manipulation

Attack Potency: Multiverse level+ (Far stronger than Beelzebub and Bael, being only able to be fully Resurrected by the fusion between the two Demons, as they are Demonized aspects of himself who were split from him upon the bastardization of his image as a deity. Immensely above Asura in his True Form as Ahura Mazda, as Baal's Avatar was comparable in might to the likes of Ahriman and superior to Noah and the Three Cardinal Archangels)

Speed: Immeasurable (Exists unbound by Time and Space, being naturally born in The Expanse, a conceptual realm of thought which transcends the flow of Time across the Multiverse, allowing those who enter it to travel throughout Space and Time at will)

Lifting Strength: Immeasurable (Transcends the laws of physics and is capable of inhabiting the Void after the destruction of the Multiverse across all of time)

Range: At least Multiversal+ (Far superior to Demons such as Belial and Nebiros, who reached across several higher planes beyond the Multiverse to prevent Alice's soul from being taken to Heaven)

Retrieved from "https://vsbattles.fandom.com/wiki/Baal?oldid=5727171"
Community content is available under CC-BY-SA unless otherwise noted.