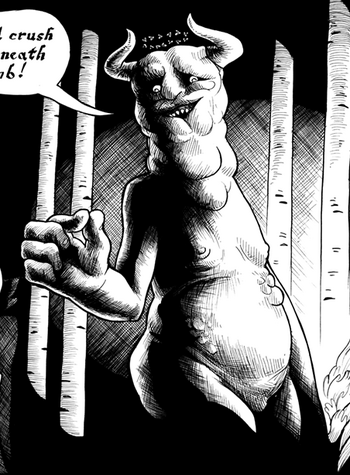 Ba'al is a minor antagonist who appears in the webcomic, The Last Halloween. They were the being who brought the zombie Sherly back from the dead, and is part of a group of monsters who are considered "high-ranking" compared to the rest.

Initially not taking Mona's group seriously and casually crushing her friends, they were eventually killed when Mona fused her scythe with the immortal arm of The Doll, allowing it to bypass their own immortality.

Tier: At least 9-B, likely High 8-C, possibly much higher

Powers and Abilities: Superhuman Strength and Durability, Large Size (Type 0), Immortality (Types 1 and 3), Regeneration (High-Mid. Immortals can instantly regenerate from being ripped into pieces), Can travel between the Shadow World and the Mortal World, Immortal Killing and Regeneration Negation (Up to High-Mid. Bypasses the immortality and regeneration of other immortals), Necromancy (Raised Shirley from the dead)

Attack Potency: At least Wall level (Far superior to Mona and her monster, who are capable of ripping off human heads with ease. Claimed to be able to crush her head under his thumb), likely Large Building level, possibly much higher (Was described as 'high ranking' among other monsters, many of whom tower over skyscrapers, can cause large explosions, and even torrential storms)

Speed: Unknown, likely Athletic Human (Reacted to Mona's scythe, which could hit other monsters before they could react)

Lifting Strength: Superhuman (Via size. Can lift smaller characters and crush them with ease)

Durability:  At least Wall Class (They were only scratched by Mona's scythe, which could bisect monsters comparable to them in size), likely Large Building Class, possibly much higher (Claimed to be "high ranking" among other monsters, meaning they could probably take hits from them)

Intelligence: Average, likely higher due to their age and experience. Is knowledgeable about the world of monsters and how it operates.

Weaknesses: Overconfident. Their immortality as well as their regeneration can be bypassed entirely by other immortal monsters.

Retrieved from "https://vsbattles.fandom.com/wiki/Ba%27al_(The_Last_Halloween)?oldid=5139893"
Community content is available under CC-BY-SA unless otherwise noted.