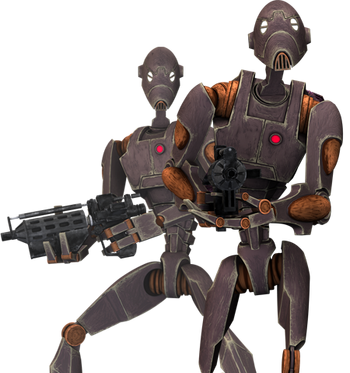 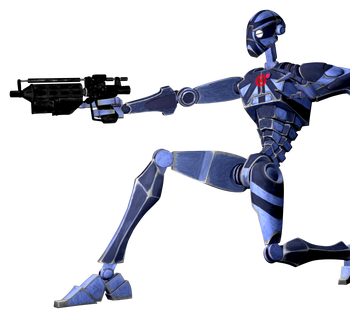 BX-series droid commandos, also known as commando droids, were a type of advanced battle droid used by the Confederacy of Independent Systems during the Clone Wars. They were created as an improvement over the standard B1 battle droids and had great agility and far superior computer processing power. They were feared for their accuracy with blasters and fighting skill as well as the fact that they did not go down easily.

Tier: 9-B physically. 9-A with vibrosword. 9-A with blasters. High 8-C with heavy weapons and explosives

Powers and Abilities: Superhuman Physical Characteristics, can process information faster than a human being, masterful hand to hand combatants, masterful marksmen and swordsmen, skilled pilots/drivers with all sorts of vehicles

Attack Potency: Wall level physically (Should be stronger than the likes of human bounty hunter Dengar. Should also be more than capable of overpowering the likes of Janus Kasmir, who was kicked into a boulder with enough force to put large cracks in it and send shards of stone flying out but was completely fine). Small Building level with vibrosword (Can cut through solid metal plating with such durability, can also ignore conventional durability to an extent). Small Building level with blasters (military grade heavy blaster pistols and blaster rifles including the SE-14 pistol and E-5 rifle carried by BXs pack such firepower). Large Building level+ with heavy weapons and explosives (BXs will often make use of Class-A thermal detonators and even rocket launchers which pack an even bigger punch)

Speed: Peak Human (Their speed and agility is at least comparable to that of ARC Troopers and peak human individuals)

Lifting Strength: Peak Human (Can easily pick up their blasters and run at the same time they shoot without suffering the recoil)

Durability: Wall level against physical strikes (Should be much more durable than the likes of Dengar and Janus Kasmir) and Small Building level against blasters (Armor plating made of a composite material which can disperse the energy of a few blaster bolt hits before failing)

Intelligence: Average. They are limited to their programming but are much smarter and more capable than B1 battle droids and B2 super battle droids.

Weaknesses: Will shut down when battery charge runs out.

A commando droid with an E-5 blaster rifle 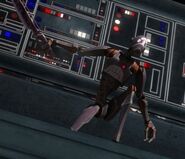 A commando droid with a vibrosword 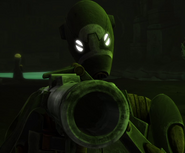