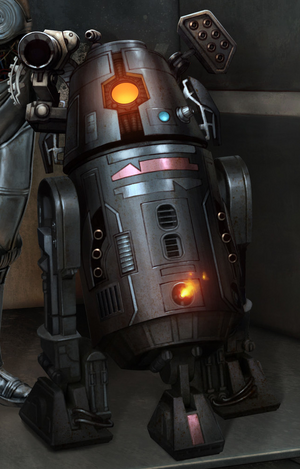 BT-1, often simply called Bee Tee, was a BT-1 assassin droid developed by the Tarkin Initiative of the Galactic Empire. After his creation, the psychopathic droid brutally murdered his creators, set the facility to self-destruct, then jettisoned himself into space. He was later recovered by Doctor Chelli Lona Aphra and reactivated by the torture droid 0-0-0. After a brief time in the service of Darth Vader and Aphra, BT-1 and his new partner 0-0-0 set off on their own. They started their own droid criminal gang and took over the Son-tuul Pride criminal syndicate.

Tier: 9-A with blasters. High 8-C with heavy weapons and explosives

Powers and Abilities: Superhuman durability, Flight (via thrusters built into his feet), is equipped with a powerful flamethrower as well as a powerful taser, Energy Projection (via blasters built into his body), skilled marksman, can hack into computers and other systems like normal astromechs, can process information at superhuman speeds, Enhanced Senses (equipped with optics that grant him vision in infrared and ultraviolet and overall far superior eyesight compared to humans)

Attack Potency: Small Building level with blasters (Equipped with a variety of blasters ranging from those that can rival heavy blaster pistols to blaster cannons which are more powerful than standard blaster carbines such as those preferred by the Stormtrooper Crops). Large Building level+ with heavy weapons and explosives (Equipped with a variety of thermal and concussion grenade and rocket launchers. The grenades should be this powerful while the rockets are likely even more powerful)

Speed: Peak Human (Astromechs, including inferior models, have consistently proven capable of keeping up with the likes of ARC Troopers), Subsonic+ flight speed (Likely in the range of 600 to 1,000 km/hr. Even inferior models of astromech have proven themselves capable of matching the flight speeds of Mandalorian Super Commandos and transport shuttles)

Stamina: Can fight so long as his power cells have charge.

Range: Tens to hundreds of meters with various weapons.

Intelligence: Average. Being equipped with assassin droid programming, BT-1 is vastly more intelligent than most other droids and even battle droids. He is a ruthless hunter and extremely dangerous combatant overall and does have some tactical ability. However, he is still limited in tactical & strategic thinking capability and cannot hope to ever match a dedicated tactical or super tactical droid or a fully sentient and trained organic soldier.

Weaknesses: Will shut down when power cells run out of charge.

Retrieved from "https://vsbattles.fandom.com/wiki/BT-1?oldid=6616015"
Community content is available under CC-BY-SA unless otherwise noted.