VS Battles Wiki
Register
Don't have an account?
Sign In
Advertisement
in: Tier 6, Tier High 6-A, Tier 1,
and 68 more 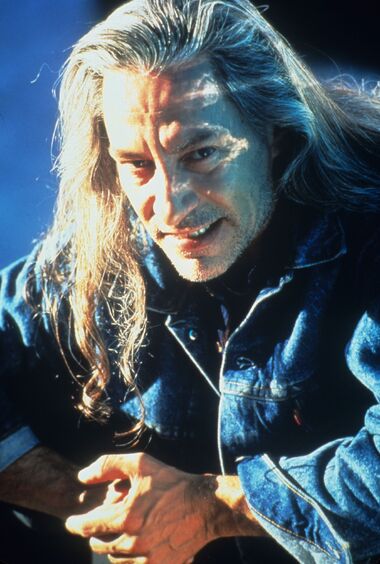 BOB is an eerie, ancient spirit from the metaphysical dimension of chaos known as the Black Lodge, having been born outside of space and time itself, spewed forth by the extreme negative force known as the "Mother of Abominations" as the trinity nuclear test tore open a rift in reality and formed an intercourse between the physical world and the extradimensional space occupied by the Lodge.

Having wandered the woods of Twin Peaks for over 40 years, commiting all sorts of heinous acts in order to collect and consume the pain and suffering of his victims, BOB eventually took a special interest in Laura Palmer, whose father he had under his own control since his late childhood, after supposedly appearing to him in a dream and asking to "get in". Intending to possess her at all costs and seemingly perceiving her as his property, BOB repeatedly subjected Laura to abuse and torture over the course of several years, gradually corrupting her personality into that of a nihilist, self-destructive individual whom he could take control, until his attempts were stymied by the other Spirits of the Black Lodge, forcing him to kill her, and giving fruition to the chain of events revolving around her murder, as well as the town of Twin Peaks as a whole

Gender: Genderless, though is identified as, and appears Male.

Age: Irrelevant. Exists naturally outside of space-time, and its laws are meaningless to him.

Electricity, Incorporeality (Spirits of BOB's ilk are stated to not be physical beings at all, instead having a "singular, energetic" quality,[1] being made of the very same aetherial electricity that comprises reality), Abstract Existence (Type 1. The realms inhabited by the Lodge Spirits are stated to be in the deepest parts of the unconscious mind,[2] and they themselves are heavily implied to be simply ideas taking the form of men[3]). By accessing higher planes, he can also obtain Higher-Dimensional Existence and Acausality (Type 4)

Attack Potency: Varies (The spirits are capable of manipulating the vibrations that underlie and connect everything in the material world to ascend upwards and downwards through its infinite layers of reality,[4] and are likewise able to do the same to others, using this ability to bring humans into "higher vibrational qualities" beyond comprehension, which stand outside of linear time and can be used to travel through, and observe its entirety at will[5]). Multi-Continent level (Windom Earle has stated that the entities of the Lodge would be capable of offering immense power, enough for one to "reorder the earth to his liking,"[6] to mortal magicians who managed to gain access to their realm) to Low Outerverse level (Can manifest in, and exists as a natural resident of the Red Room, a plane of existence that is a part of the spiritual realm and as such perceives the material world as being illusory, underlying its entirety as a "deeper" reality beyond time[7][8]) | Outerverse level (Resides in realms of nonexistence described as being located "nowhere," which stand on a deeper level than the Red Room[9] in the same way it underlies the physical world at large,[10] to the point that time, which is still present in a non-linear, unstable form within the former, is completely absent from them, with physical effects relating to it not occuring as a result)

Speed: Varies in a physical host. Relativistic+ Travel and Attack Speed (Can manipulate and travel through the electricity within wires, as well as send others through it, having sent Phillip Jeffries from Philadelphia to Argentina in moments[11]) to Immeasurable (Can access higher planes of existence outside of time from which its flow can be observed and physically traveled across, with Major Briggs having been ragdolled back and forth through history by an unseen force during his experiences in one such plane.[5] Entities such as him are stated to move free of the constraints of space and time[12], and naturally exist in realms above both) in his Spiritual Form | Irrelevant

Striking Strength: At least Street Class within a host. Unknown otherwise. Up to Low Outerversal | Outerversal

Durability: Unknown (Exists as a purely spiritual/energetic being in his true form, and the durability of his hosts likely tends to vary). Up to Low Outerverse level | Outerverse level

Range: Outerversal. Can modulate the very frequency of his being to travel across infinite higher vibrational levels of existence in the form of electricity. Capable of accessing higher planes of existence and extradimensional spaces such as the Red Room and the Room Above the Convenience Store, as well as traveling back and forth between them.

Standard Equipment: None Notable, though he is willing to utilize all sorts of weapons against his victims, mainly of the blunt kind.

Intelligence: In spite of his deranged, non-chalant behavior moved purely by instinct, BOB is a vastly ancient spirit existing beyond space and time themselves, operating on a level of existence far beyond human comprehension, with individuals such as Dr. Jacoby describing their experiences in the Lodges as beyond what the human mind can visualize, and akin to "seeing" their surroundings with all of their senses simultaneously, on a metaphysical level.

Weaknesses: Appears to require permission in order to fully possess someone, although he is not above employing torture and extended abuse in order to achieve his ends. Otherwise None Notable.