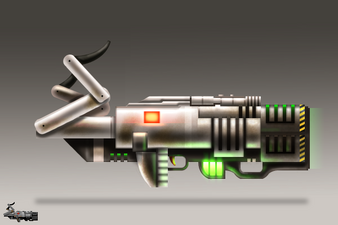 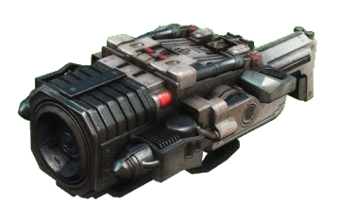 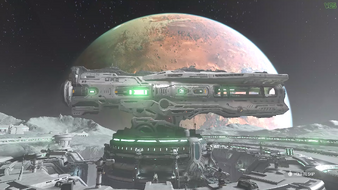 The BFG9000 strikes fear wherever its name is heard, hell or above, by a human or by a demon. In the classic games, this weapon shot energy spheres that unleash tracer rays and a deadly wave upon impact. In Doom 3, the BFG 9000 fires a projectile with a small computer core that actively maintains targeting and delivers a stream charge down each beam to soften targets before detonation. In Doom 2016, the shots are powered by something stronger than even nuclear power, Argent energy.

When mounted inside the station's magnifying array, the BFG can be fired into a series of reactive lensing rings; these rings pump a constant stream of gaseous Argent through the barrel, which ignites in reaction to the electrified plasma, producing a tremendous energy wave powerful enough to crack the surface of a planet.

Attack Potency: Multi-City Block level (Should be stronger than the UAC's 2 Megakelvin laser , Vaporized a large portion of the Spider Mastermind's brain) | Multi-Continent level (Vaporized a portion of Mars' surface down to its core)

Speed: Transonic attack speed, higher upon detonation (Travels at 875 map units per second. For reference, the RPG-7 is around 300 m/s and 700 map units per second; translating the BFG at 375 m/s. The blast upon impact is much faster) | At least Sub-Relativistic, possibly Relativistic+ (Reached the surface of Mars from Phobos in a few seconds)

Range: Up to thousands of meters in the hands of a sufficiently skilled wielder. Possesses a 15x15 meter blast radius. | Planetary