VS Battles Wiki
Register
Don't have an account?
Sign In
Advertisement
in: Characters, Fate, Nasuverse,
and 40 more 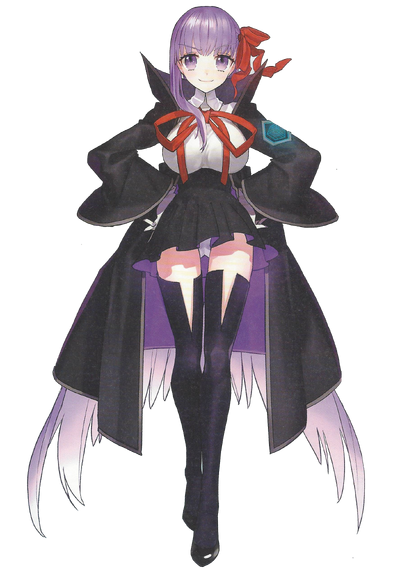 MoonCancer's True Name is BB, an advanced artificial intelligence of the Moon Cell created from Sakura Matou's suppressed feelings for Hakuno Kishinami in a certain alternate world. Having her behavioral restraints removed by Kiara Sessyoin, she took control of the Moon Cell itself to prevent Hakuno's death, creating the Sakura Five and the Sakura Labyrinth to do so.

In the world of Fate/Grand Order, as a result of the Kiara of that world becoming one with the Kiara of the Fate/Extra world, the Moon Cell reproduced BB as a Servant and dispatched her to the world to assist Ritsuka in defeating her.

Attack Potency: Island level (Despite her abysmal E-Rank Strength, she still proves capable of fighting against Meltlilith, Tristan, Suzuka Gozen, Nero and EMIYA), Island level+ with Cursed Cupid Cleanser (As an A-Rank Anti-Unit Noble Phantasm, it is comparable to Durinana)

Speed: Massively Hypersonic (While she only possesses D-Rank Agility, she is nonetheless able to keep up with Meltlilith)

Range: At least Several hundred meters with her regular attacks (Her Sakura Beam is comparable in range to most Servants normal ranged attacks), Several kilometers with reality warping (Completely reconstructed SE.RA.PH., which was as large as a city)

Standard Equipment: The Bishop's Staff of Rulership and The Golden Grail

Intelligence: While she is incredibly playful and mischievous, BB is nonetheless an extremely intelligent AI, managing to break free from her restraints and take control of the Moon Cell in her original world, attaining the authority of the Earth Mother Goddesses and creating both the Sakura Labyrinth and the Sakura Five to ensure that Hakuno would not die. Additionally, she was capable of preparing the "KP" system to limit Kiara's power when she became Beast III/R, and send BB/GO to the Moon Cell to circumvent her requirement to return once her mission was over.

Weaknesses: BB typically only plays around with her foes instead of immediately finishing them off, and she can be crippled or severely weakened by particularly complex and powerful computer viruses. Potnia Theron will be ineffective against those not born on Earth.

Cursed Cupid Cleanser: C.C.C.: A Noble Phantasm BB devised after growing bored of Cursed Cutting Crater. BB enters imaginary space before rewriting reality with a special version of her BB Channel Reality Marble, where she is the producer, host, and game master. She then plunges her opponent into complete chaos as she transforms into an "invincible nurse" that injects all the curses of Cursed Cutting Crater into her target.