B2 super battle droids were an advanced battle droid used by the Confederacy of Independent Systems during the Clone Wars. Super battle droids were much stronger than their predecessors, and they did not require a command system to operate, which gave the droids limited independence. Another improvement was their thick armor casing, which contained their fragile sensors.

Attack Potency: Likely Small Building level physically (The physically strongest standard infantry of the CIS military. Can easily overpower and casually kick around astromech droids, which can take blaster carbine shots and blows from an E-XD Infiltrator Droid. Can bust through permacrete walls, leaving behind multiple metre wide holes). Small Building level with blaster attachment (The blasters mounted on the B2's arms pack similar firepower to military grade heavy blaster pistols and blaster rifles. Can blast multiple metre wide holes in permacrete walls on the highest power settings). Large Building level+ with grenade launcher attachment (They pack at least as much of a punch as the Class-A Thermal Detonator if not more so. Note: B2-HA variant only)

Lifting Strength: Superhuman to an unknown degree (Much stronger than the B1, which can lift a weight that requires two Clone troopers to lift)

Durability: Likely Small Building level against physical strikes (Should be able to withstand the forces of their own physical strikes. Should be at least as durable as the likes of R2-D2 and Chopper), Higher against directed energy weapons (Armor plating includes a composite material which can disperse the energy of a few blaster bolt hits before failing)

Intelligence: Below average (They are limited to their programming which is only limited to “shoot it until it dies”)

Weaknesses: The Super Battle Droids are inept without preparation, the earlier models could be deactivated by destroying the main frame on one of the main ships. Will shut down when battery charge runs out.

B2 standard with wrist blasters on both arms. 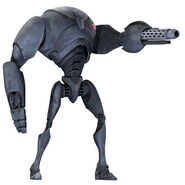 B2-HA with wrist blasters on right arm and grenade launcher on left arm.

B2-RP rocket pack droid in flight.
Add a photo to this gallery

Retrieved from "https://vsbattles.fandom.com/wiki/B2_Super_Battle_Droid?oldid=5581896"
Community content is available under CC-BY-SA unless otherwise noted.