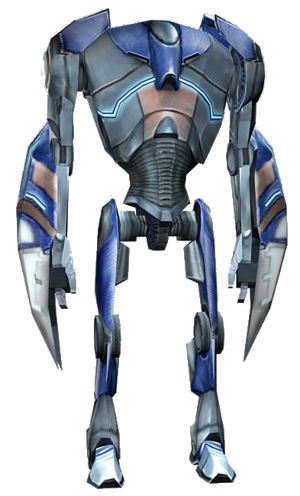 The B2 Grapple Droid were a variant of the B2 super battle droid model which was designed for close-range combat. These droids were notably used during the battle over Coruscant on the Invisible Hand and in the Battle of Ord Mantell.

Powers and Abilities: Superhuman Physical Characteristics, skilled hand to hand combatants, can process information faster than a human being

Attack Potency: Small Building level (Capable of smashing through stone walls and blast doors that can withstand blaster fire. Should be stronger than the standard B2, which can kick around astromech droids that are strong enough to withstand blaster carbine shots and blows from an E-XD Infiltrator Droid)

Durability: Small Building level against physical strikes (Should be able to withstand the forces of their own physical strikes), Higher against blasters (Armor plating made of a composite material which can disperse the energy of one or more blaster bolts before failing)

Intelligence: Below average (They are limited to their programming)

Weaknesses: Will shut down when battery charge runs out. No way to counter powerful ranged attacks (designed only for melee combat with no ranged weapons of their own).

Retrieved from "https://vsbattles.fandom.com/wiki/B2_Grapple_Droid?oldid=5523522"
Community content is available under CC-BY-SA unless otherwise noted.