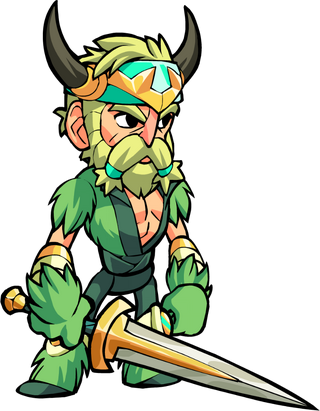 Born of a viking mother and bear father, Bodvar grew up feared and mistrusted by his own people.

Bodvar's first nemesis was the terrible giant bear Grothnar, his own brother. By defeating Grothnar in a battle that lasted seven days, Bodvar chose to side with humanity and became the protector of the people of the north. He led his Skandian people against the White Queen of Helheim, slew the White Dragon Sorcerer, and lived the life of an all-conquering hero.

After he single-handedly ended the Giant Wars by trapping the fire giant king in his own volcano, Bodvar sensed his work was done. But he felt doomed to never be taken by the Valkyries to Valhalla because he could never manage to be defeated in battle. So he travelled to Asgard himself, broke down the doors, and let himself in.

Classification: Half Bear, Half Viking

Attack Potency: At least Large Star level (Has more attack points than Artemis, who can rip the core out of a star, which would require this much energy, meaning he should scale above this feat)

Speed: FTL (Bodvar is capable of tagging Val who has faster than light cognition via statements)

Lifting Strength: Stellar (Can grapple with Ulgrim and Artemis who can both hold the core of a star.)

Striking Strength: At least Large Star Class (Can harm characters who can take numerous hits from Lord Vraxx, and damage opponents comparable to himself with physical strikes.)

Durability: At least Large Star level (Can take attacks from characters who are comparable in strength to him)

Stamina: Limitless (Even when he was mortal, Bodvar was capable of enduring fights that lasted for seven days straight)

Standard Equipment: His sledgehammer and sword

Intelligence: Bodvar is an extremely established warrior, with well over a thousand years of continuous fighting and combat training. Even as a young warrior, Bodvar was capable of defeating wars all by himself, and leading great armies to overwhelming victories. As one of Valhalla's greatest champions, he should be superior to the likes of Gnash, Sentinel and Ember.

Retrieved from "https://vsbattles.fandom.com/wiki/B%C3%B6dvar?oldid=6038078"
Community content is available under CC-BY-SA unless otherwise noted.