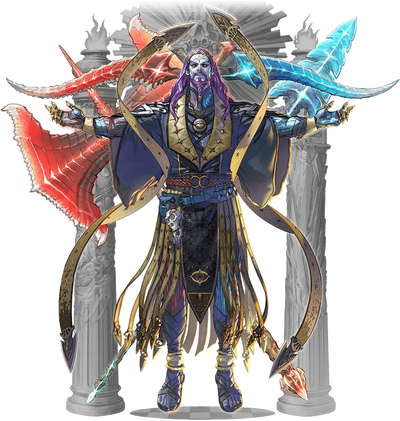 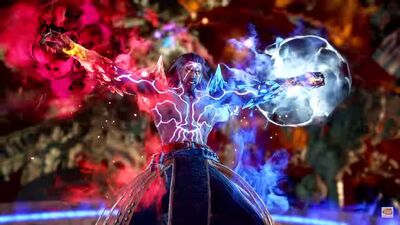 Azwel is a character who first appeared in the reboot of the Soul series Soul Calibur Vl as one of the antagonists of the series. He serves as the main antagonist of the Libra of Souls Story. He calles himself the "Leader of Humanity" and plans to gather the power of both Soul Edge and Soul Calibur in order to create the Ultimate Seed.

Attack Potency: Large Town level+ (Superior to Groh and the Libra of Soul protagonist who has previously fought the likes of Maxi, Mitsurugi and Kilik) | At least Small Country level (Stated that currently his Ultimate Seed had the power to destroy a country or two)

Intelligence: Genius. Azwel is extremely intelligent. In combat, he can best the skilled warrior Groh as well as the Libra of Souls protagonist who could fight against many highly skilled combatants. He is a master strategists and is not afraid to eliminate his opponent if he has no use for them. He is a tactician who utilizes his various weapons to overwhelm the opponent with completely unpredictable attacks that appear out of nowhere.

Weaknesses: Sometimes can be a bit sadistic.