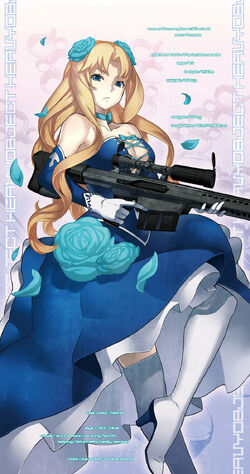 Azureyfear Winchell is a noble daughter of the Winchell family and one of Heivia Winchell's little sisters. Unlike her brother, Asureyfear holds the family grudge towards the Vanderbilt family up to a nearly fanatical degree, and she hates her brother's fiancee with a passion. She's also an experienced climber, hunter and markswoman.

Tier: 10-A physically, 9-B with anti-materiel rifle

Durability: Street level (Survived being inside one of the fastest Objects despite not being an Elite)

Stamina: High, Azureyfear is very athletic and an experienced hunter and mountain climber, withstood for a time the high inertial Gs produced by the Destruction Fes, something not even Elites, who have been extensively modified would be able to endure

Intelligence: High, Azureyfear was the leader of an operation involving three of the major global powers that allowed her to fund the development and construction of her own Object