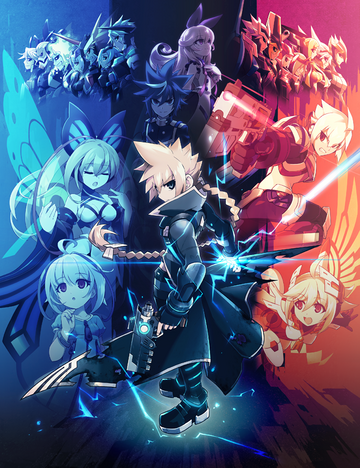 For detailed information about this series, visit the Azure Striker Gunvolt Wiki.

Azure Striker Gunvolt, known as Armed Blue Gunvolt in Japan, is a platform game released by Inti Creates for the Nintendo 3DS eShop released in August 2014. In addition to utilizing gameplay similar to Mega Man Zero, Azure Striker Gunvolt also introduced new gameplay elements such as Gunvolt's ability to "tag" enemies and target many at once, adding an additional layer of complexity to the genre. The game also got a PC version on Steam, featuring full Japanese voice acting and some lines cut from the 3DS version. Source.

Azure Striker Gunvolt is set during an unspecified date in the near future, in which several people called "adepts" have developed "septimal powers." These powers enable superhuman feats including flight, the use of powerful energy weapons, and manipulation of elements such as fire, water, and electricity. The world is at peace thanks to a world-spanning corporation known as the Sumeragi Group. However, the Sumeragi Group is, in reality, controlling and experimenting on adepts. Gunvolt, one of the most powerful adepts, has the ability to create electrical fields and works for an organization known as QUILL, which is seeking to reveal and put a stop to Sumeragi's ulterior motives.

In terms of AP, this verse is impressive. Even normal humans in this verse are Street level, due to a normal middle schooler surviving an indirect explosion and being flung into a shelf. Most Adepts, humans attuned to the seventh stage of Lifewave giving them ESP, are Large Town level from scaling Joule's anthem multiplier from shards in combat and have Sub-Relativistic reactions due to reacting to light speed attacks from the likes of Jota. Anthem amplifies Adept Septimas a hundredfold, bringing characters that have used the power up to City level. Thanks to Ghauri's kinetic energy, characters in the second game have Low 7-B levels of power. The top tiers of the main universe are Mountain level. The verse also has various hax, with several characters being able to negate durability with things like absolute zero molecular freezing or turning somebody into data. The strongest ability in the verse is Joule's causality manipulation. The Luminous Avenger iX timeline brings characters up to Large Mountain level.

Joule
Add a photo to this gallery

Asimov
Add a photo to this gallery

Stratos
Add a photo to this gallery

Asroc
Add a photo to this gallery

Bakto
Add a photo to this gallery