VS Battles Wiki
Register
Don't have an account?
Sign In
Advertisement
in: Tier 1, Tier High 1-B, Characters,
and 36 more 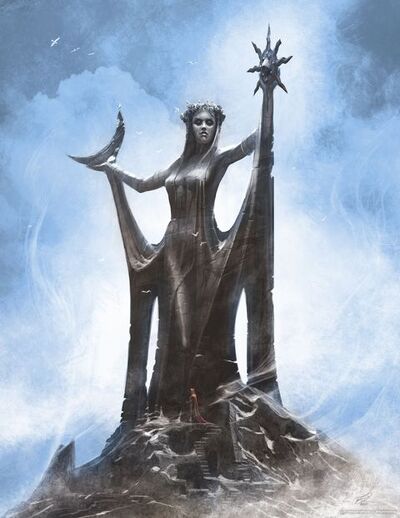 Azura is the Daedric Prince of Dawn and Dusk, whose sphere is heavily associated with the notions of interstices, rims and thresholds, as well as the magic between all realms and the concepts of fate and prophecy. Among the Lords of Oblivion, Azura is noteworthy for being one of the few who can be seen as conventionally benevolent, with her ardent followers often holding that she demands not only mindless submission and adoration, but also genuine love and care. As such, she is held in high-esteem by many cultures in Tamriel, particularly by the Khajiit, whose viewpoint of Azura is so elevated as to be considered one of the defacto heads of their pantheon.

Name: Azura (Also called Azurah by the Khajiit). The Queen of Dawn and Dusk, Azura of the Crimson Gate, The Mother Soul, Moonshadow, Mother of the Rose, Queen of the Night Sky, The Rim of all Holes, The Cosmic Severer.

Age: Inapplicable. Exists beyond, and predates, the concept of linear time.

Powers and Abilities: Abstract Existence (Type 1. Gods are described as "manifest metaphors"[1] and their actions as "ideologies given skin,"[2] existing as aspects of the Aurbis that each personify a specific concept,[3] existing not as mere beings, but as the ideas themselves[4]), Acausality (Type 5. Gods from outside of the mortal plane are completely beyond linear time and reside in a state where all events are always happening simultaneously,[5][6] being as such unbound by cause, duration, consequence and eventuality,[7][8] with their lives being described as unable to support most of the qualities of a narrative.[1]), Causality Manipulation (Similar in nature and power to other greater Ada such as the Eight Divines, who are stated to be capable of modifying both the past and the future at their leisure[9]), Immortality (Types 1, 2, 3 and 5. Gods are unbound by the concepts of Life and Death, which only came to be during the creation of the Mundus,[10] and even incomplete deities such as Vivec can resurrect themselves at will from the timeless world of the gods[5]), Resurrection, Higher-Dimensional Existence, Time Manipulation (The nature of time in the planes of oblivion is completely subjective and determined exclusively by the will of the governing Prince, with the inhabitants of such planes being stated to not be subjected to time itself, but to their masters alone.[11]), Spatial Manipulation and Higher-Dimensional Manipulation (Being simply extensions of their being,[12][13] a Daedric Prince's personal realms are under their full control both in form and structure, with the more charitable ones being able to freely alter their number of dimensions as to create vistas comprehensible to the minds of mortals on a whim, as well as adopt the trappings of linear time to better suit interaction with them[14]), Large Size (Type 10), BFR, Teleportation, Telekinesis, Weather Manipulation, Incorporeality, Telepathy, Portal Creation, Soul Manipulation, Memory Manipulation, Matter Manipulation, Magic, Chaos Manipulation and Probability Manipulation (Daedric Spirits come to power by harnessing the chaos of possibilities that is the void of Oblivion,[15] being unable to truly create,[16] and instead only rearranging formless potential into something concrete), Reality Warping, Conceptual Manipulation (Type 1. Immensely above minor gods such as the Ideal Masters, who are stated to live in a platonic ideal of their own making beyond the Mundus.[17]), Energy Manipulation, Law Manipulation and Physics Manipulation, Transmutation, Mind Manipulation Sound Manipulation and Information Manipulation (The entirety of the Aurbis is, in fact, a song,[18] and entities with divine power are capable of manipulating the underlying tones of existence by acknowledging that principle, shaping reality through the manipulation of stories and archetypes,[19] making myth[20] and metaphor[21] manifest)

Attack Potency: High Hyperverse level (As a Daedric Prince, Azura is one of the primary Ada that fundamentally maintain and comprise the infinitely-dimensioned[22] Void of Oblivion, holding absolute domain over and personifying one of the sixteen partitions that make up the entirety of the realm and represent the empty spaces behind the spokes of the Wheel of the Mundus[23])

Range: High Hyperversal (Can freely traverse through Oblivion, an infinite-dimensional void which encompasses all possibility and contains an endless number of individual daedric realms)

Intelligence: Supergenius. By virtue of her status as a Daedric Prince, Azura, in both power and awareness, ranks highest among all Daedra, of which even the lowliest are said to have witnessed all of mortal existence, and to have a far more attuned sense of the Aurbis' scale and nature than even the most erudite of mortal scholars, boasting of a much broader ontological framework fit to dealing with the paradoxical nature of the higher realms.[24] 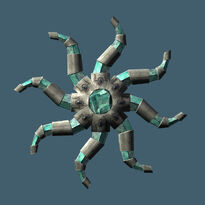 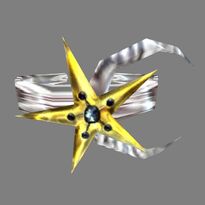 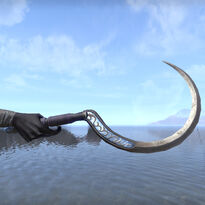 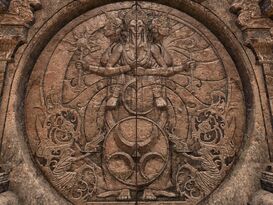 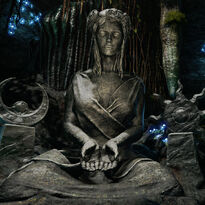 Azura in the religion of Dunmers/Chimers 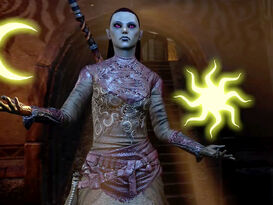 Azura often possess a mortal, like Seryn in this case, to deliver her messages on Nirn