Azura is one of the main protagonists of Fire Emblem: Fates. A mysterious songstress, she is in truth a princess of Nohr who was kidnapped by Hoshidan forces, placing her in a situation, not unlike Corrin's. She accompanies them on their journey regardless of the path they choose, serving a pivotal role in the war before fading from history shortly afterward.

Age: Late teens to early twenties (born around the same year as Corrin)

Classification: Half-Human and half Dragon

Powers and Abilities: Superhuman Physical Characteristics, Weapon Mastery (Skilled Lance Wielder), Magic, Water Manipulation, Empathic Manipulation, Healing, Statistics Amplification, Statistics Reduction (With her Songs, she can heal and raise the morale of her allies; increasing their parameters, decrease her enemies' will to fight; weakening them, and calm down a raging Corrin), Non-Physical Interaction (Can harm souls), Extrasensory Perception, Can survive without her soul

Stamina: Superhuman (Despite using her amulet in the Nohr route too much, she managed by sheer force of will survive for a few days until Corrin won)

Range: Extended melee range with her spear. Tens of meters with Javelins.

Intelligence: Azura is taciturn and cold most of the time, but is an incredibly skilled singer and dancer, mastering her use of the amulet at a relatively early age and being able to rouse her allies with her movements. She is also a fairly skilled combatant, being able to hold her own in combat with a lance and can also act as a Pegasus Knight, showing skill in mounted combat.

Weaknesses: If she uses her amulet too much, she'll die, and is a little obsessed with her cousin. If she speaks about Valla outside of it, she'll die. 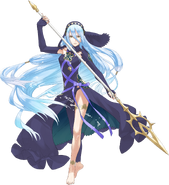