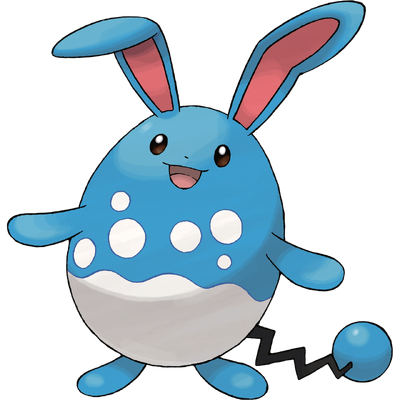 Azumarill is a Water/Fairy type Pokémon (simply Water prior to Generation 6) that resembles a rabbit. It was introduced in Generation 2 as the evolution of Marill and as the Aqua Rabbit Pokémon. The lower half of its body is pure white with a bubble-like pattern above it, helping it to camouflage in water. It also has extended ears, similar to those of a rabbit, that allow it to hear and distinguish prey; even in fast-moving waters, along with a tail that connects to a blue, circular tip. It lives in rivers and lakes, and can live in the water all day long. 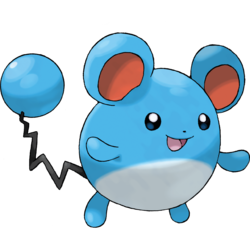 Marill is a Water/Fairy type Pokémon (simply Water prior to Generation 6) that resembles a mouse somewhat. It was introduced in Generation 2 as the Aqua Mouse Pokémon, but made its first appearance prior to that in the anime. It has a nearly spherical shape with a white belly, and has round ears with red insides, which are especially useful for detecting sounds from afar. Its black tail is in a zigzagging pattern that is able to stretch, allowing Marill to fish near fast-moving streams without fear of being swept away. 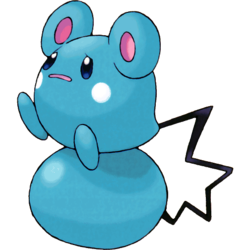 Azurill is a Normal/Fairy type Pokémon (simply Normal prior to Generation 6) that resembles a small mouse somewhat. It was introduced in Generation 3 as the pre-evolution of Marill and as the Polka-Dot Pokémon. Similarly to Marill, it has circular ears with pink insides and a thin, black, zigzagging tail has a large blue ball at the end. This tail has elasticity properties which helps Azurill stay afloat and ward off predators.

Gender: 75% of the species are female. The rest are male | Species has an equal gender ratio

Speed: Transonic (Can react to sound based moves like any other Pokémon) | Massively Hypersonic+ (Can dodge attacks from Pikachu) | Relativistic (Should be able to keep up with Poliwrath)

Intelligence: Naive | High (Pokémon have a natural instinct for battle) | Same as Marill

Weaknesses: Due to being a baby Pokémon, it is quite naive. It is weak to Poison- and Steel-type moves | It is weak to Electric- and Poison-type moves. It is also weak to Grass-type moves if Sap Sipper is nullified/bypassed | Same as before

Note: This moveset covers all the possible moves that Azumarill can learn. If you want to see the specific movesets for Azurill, Marill or Azumarill, then see here, here and here for Azurill's, Marill's and Azumarill's movesets respectively. Note that we only use level-up moves and egg (breeding) moves for these profiles. Also note that any moves that Azurill can learn through these methods can included in Marill's and Azumarill's movesets too.