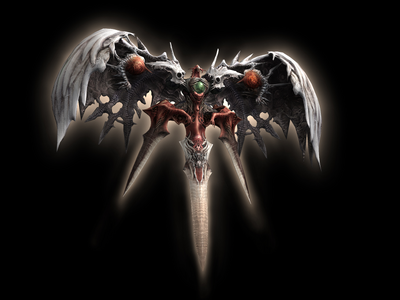 Azrail, the Spirit of Perification, is the true main antagonist of the game Chaos Legion. It was sealed away by the Order of St. Overia after the freed it in an attempt to use it's power but failed. Before it was sealed, it released a darkness that possessed Sieg's friend Victor in order for him to break the seal to it's prison so it can go forth and merge the three worlds back into one.

Powers and Abilities: Superhuman Physical Characteristics, Large Size (Type 1), Flight, Energy Manipulation, Darkness Manipulation (Can cover itself in darkness to reduce the damage it takes), Possession, Summoning, Transformation, Soul Manipulation (Was going to move all the souls from the Celestial World, Middle World, and Nether World into one world and grant them immortality, Absorbed Siela's soul into itself), Reality Warping, Law Manipulation (Was going to merge three seperate worlds into one and create new laws), Likely Regeneration (Mid-Low; Likely comparable to Victor who could regenerate two bullet holes in his stomach in seconds), Homing Attack, Teleportation, Invisibility (It can summon invisible monsters)

Attack Potency: At least Large Star level (Has the power to merge three seperate worlds into one, including the Middle World which contains a sun)

Range: Steller (It can merge the three seperate worlds, one of which contains a Sun)

Retrieved from "https://vsbattles.fandom.com/wiki/Azrail?oldid=6630487"
Community content is available under CC-BY-SA unless otherwise noted.