VS Battles Wiki
Register
Don't have an account?
Sign In
Advertisement
in: Tier 1, Tier Low 1-C, Characters,
and 33 more 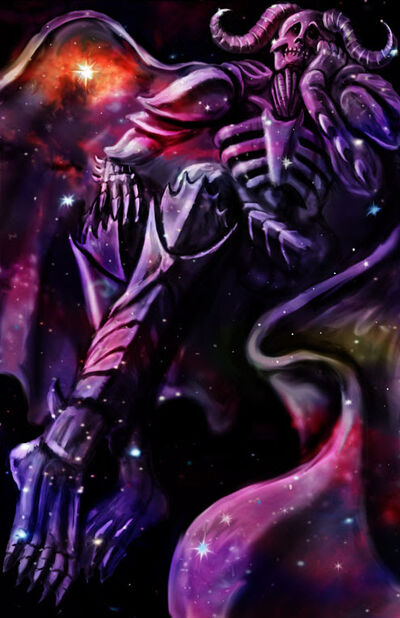 Azrael is a member of the eight Old High Ones, beings beyond gods that literally believed the multiverse into existence. Of the eight, Azrael is the only one to show direct benevolence towards lesser beings, such as favoring Death over The Auditors of Reality.

Name: Azrael, The Universal Death, the Great Attractor, the Beginning and the End of Time

Classification: Old High One, Master of billions of lesser Deaths,

Attack Potency: Low Complex Multiverse level (Azrael is a member of the Old High Ones, who control the absolute entirety of the Discworld multiverse on all possible levels. Created, and is stated to be capable of destroying, time on a Multiversal scale. He exists on the level of his Clock, which in turn exists on a higher ontological level than the multiverse, and also enables time to work on a multiversal scale. As such, Azrael transcends the multiverse.)

Speed: Immeasurable, likely Omnipresent (Embodies the concept of death, which exists all over the Discworld multiverse)

Standard Equipment: The Clock (Which shows Time what the Time is)

Note: "The Science of Discworld" books cannot be used for establishing the cosmology of the verse. The books explains mathematical and scientific concepts to the readers, but these explanations are not clear evidence that those structures exist in a cosmological sense within the Discworld multiverse itself.