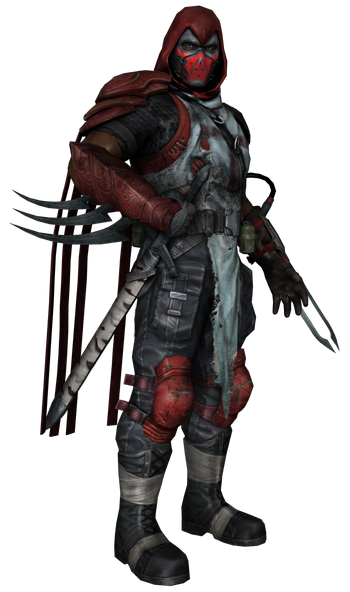 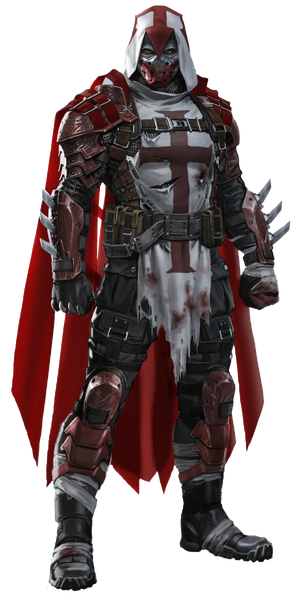 Michael Lane, also known as Azrael, was a policeman turned into a mentally unstable criminal after a failed experiment to make him the "ultimate crime fighter". Eventually, he encountered and was stopped by Batman. Realizing all the bad he has done, he went to a church to confess his sins, however he was instead recruited and brainwashed by a secret organization named as the Order of St. Dumas. He was given a mystical armor and sword and was tasked to spy on Batman and train to be as skilled as him. While seeking Batman's approval to become his successor, his true task was to kill him and take his place as Gotham City's protector.

Attack Potency: Athlete level, possibly Street level physically (Trained himself to be as skilled as Batman in terms of martial arts and stealth combat) | Small Building level with The Suit of Sorrows (His armor amplifies his physical attributes, making him on par with Batman. In one of the endings from his Arkham Knight sidemission, he manages to break his own sword with a single arm movement. Can kick through metal bars and send people flying several meters away with a single punch)

Speed: Unknown physically | At least Supersonic+ with The Suit of Sorrows (Can perform the same types of Fear Takedowns as Batman, where he can view bullets from the Heckler & Koch HK416 move incredibly slow, as well as dodge them)

Lifting Strength: Unknown physically | At least Class 5 with The Suit of Sorrows (Comparable to Batman. Can snap small metal bars and throw around grown men effortlessly)

Durability: Athlete level, possibly Street level physically | Small Building level with The Suit of Sorrows (Withstood hits from Bane. Can brush off his own explosive gel exploding in his face only with slight irritation, and it should be comparable in power to Batman's explosive gel)

Intelligence: Not only Azrael has police trainment under his belt, he's able to reproduce all of Batman's techniques he has learned over the years by simply watching The Dark Knight in action while avoiding detection all together.

Weaknesses: Mentally unstable. Believes himself to be a "tool of God" and he's completely blinded by his faith. Prone to extreme violence and doesn't see the point of letting criminals live. The Order of St. Dumas rewired his memories so he wouldn't acknowledge his purpose until something triggers him to act upon his true mission.

Key: Base | With equipment

Retrieved from "https://vsbattles.fandom.com/wiki/Azrael_(Arkham_Series)?oldid=5953583"
Community content is available under CC-BY-SA unless otherwise noted.