VS Battles Wiki
Register
Don't have an account?
Sign In
Advertisement
in: Characters, Male Characters, Immortals,
and 21 more 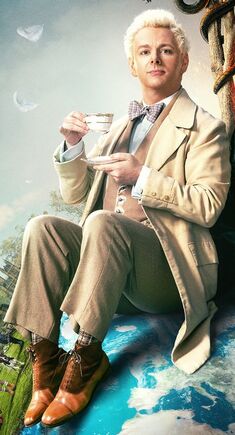 Aziraphale is an angel who doubles as a rare book dealer. He's looking to prevent the apocalypse because he enjoys humans and he likes his life on Earth. After all, there are restaurants on here, for a start.

Aziraphale was sent to guard the Garden of Eden with a flaming sword but later gave it to Adam and Eve when they were thrown out of Eden. As Aziraphale watched the two depart into the wilderness he first met Crowley - then Crawley - who had transformed himself into a snake to tempt Adam and Eve. The pair wondered whether they had done the right thing - giving up the sword - and the wrong thing - tempting Adam and Eve - respectively. After being asked, Aziraphale reluctantly told Crawley he had given up his sword, much to the latter's amusement, and they watched Adam use it to fend off a lion. Aziraphale sheltered Crawley with his wing from the rain beginning a 6000 year old friendship between the two.

Gender: Inapplicable (angels have no gender, appears as male)

Powers and Abilities: Superhuman Physical Characteristics, Immortality (Type 1 and 3), Regeneration (High, angels can regenerate themselves after being completely discorporated), Telekinesis, Self-Sustenance (Type 1, 2 and 3), Reality Warping (Can perform miracles to alter reality), Magic, Cloth Manipulation (Can create clothes and alter his own), Light Manipulation (Can generate light at will), Creation (Can make objects like coins appear from nowhere), Healing (Healed Anathema's injuries after her car accident), Matter Manipulation (Altered Crowley's car and Anathema's bicyle), Possession (Can share a mortal body with a human and manifest through it), Incorporeality (Angels are immaterial beings and only use a physical body as a way to manifest themselves on Earth), Flight, Teleportation, Dimensional Travel

Attack Potency: Unknown, possibly Large Star level (Demons and angels are comparable in power. Should be comparable to demons like Crowley, who helped creating a nebula and likely finished it himself)

Speed: At least Peak Human, higher via Flight and Teleportation

Weaknesses: As an angel, Aziraphale is vulnerable to Hellfire and dark magic. Aziraphale's understanding of the human mind has its limits.