VS Battles Wiki
Register
Don't have an account?
Sign In
Advertisement
in: Tier 6, Tier 6-C, Characters,
and 32 more 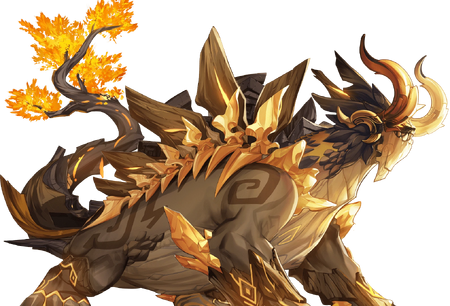 Azhdaha is the Overlord of the Geovishaps. Once a blind earth spirit, Azhdaha was gifted sight by Rex Lapis, granting him the ability to finally see the world. In return for this gift, he swore to protect and coexist with the people of Liyue alongside the Geo Archon.

After losing his memories due to his erosion and his mind suffering from the unwitting attacks performed by humans on the leylines that sustained him, driven to madness, he waged war upon Liyue and Rex Lapis, breaking his contract and forcing the Geo Archon to subjugate his long-time friend. After a lengthy battle within The Chasm, Azhdaha was finally defeated and sealed beneath a great tree that would later be called "Dragon-Queller".

Classification: Overlord of the Geovishaps, The Earth Dragon.

Powers and Abilities: Superhuman Physical Characteristics, Inorganic Physiology (as an Earth Spirit, Azhdaha is composed entirely of elemental crystal), Large Size (Type 1), Longevity, Extrasensory Perception (Azhdaha can sense energies and earth-forms), Earth Manipulation, Magma Manipulation, Vibration Manipulation (can emit seismic waves at will), Psychometry (Azhdaha can see into the memories of all forms of earth, such as rocks, ores and crystals), Elemental Manipulation (with Elemental Infusion, comprising Fire, Water, Ice and Electricity), Danmaku (Azhdaha is capable of raining down elemental projectiles over a large area), Homing Attack (Azhdaha's elemental projectiles are capable of homing in on enemies), Breath Attack (with Primordial Shower and normal breath attacks), Status Effect Inducement (can mark struck enemies with an elemental sigil that deals consistent damage over time), Disease Manipulation and Empathic Manipulation (Prolonged exposure to concentrated elemental energy, can cause effects which vary from illnesses at best to changes in personality at worst[1]), Minor Paralysis Inducement (with Electro-Charged), Explosion Manipulation (with certain Pyro and Geo attacks, as well as Overloaded), Damage Boost (with Vaporize and Melt), Statistics Reduction (with Superconduct), Avatar Creation (can manifest his consciousness in the form of a child named Jiu), Mind Control (took over the minds of a group of miners to dig a hole to the location of his seal underneath the Dragon-Queller), Power Bestowal (Azhdaha's Yin half embued the Traveler and Zhongli with the strength necessary to defeat the rampaging Yang half), Healing and Resurrection (Azhdaha's Yin half was capable of resurrecting and healing fallen allies during the fight with his Yang half). Resistance to Disease Manipulation and Empathic Manipulation (Azhdaha resists the effects of strong concentrated elemental energy which Smaragdus Jadeite causes[1]), Earth Manipulation, Fire Manipulation, Water Manipulation, Ice Manipulation and Electricity Manipulation, as well as Sealing (Azhdaha required several dozen seals to be placed upon him and his prison for him to be kept from escaping, one of which was The Unforged).

Attack Potency: Island level (As one of the strongest entities to exist in the Archon War, though considerably weakened from his prime and his power split in half, he should still be comparable to Andrius, who created a storm of this magnitude) | At least Island level (In his prime, Azhdaha is well over twice as powerful as he is in his previous key. Both legends and Morax claim that his tiniest movements would cause great earthquakes to surge throughout Liyue. He is considered equal if not superior to Morax in his prime, with Zhongli stating that he could never have considered himself superior to him at any point during their battle).

Striking Strength: Island Class (Azhdaha can significantly damage Prime Morax, who is vastly superior to Prime Barbatos, with his physical strikes) | At least Island Class (far stronger in his prime).

Stamina: At least Very High, likely far higher. As an elemental being, Azhdaha's vitality vastly outclassed that of Morax's prime, forcing the latter to seal him away to secure his victory.

Range: Dozens of Metres, normally. At least Tens of Kilometres with magic and earthquakes.

Intelligence: Above Average. Capable of rhetoric that surpasses that of Zhongli in certain subjects but is otherwise not shown capable of practical intellectual brilliance comparable to that of more notable minds such as Tartaglia or Ningguang.