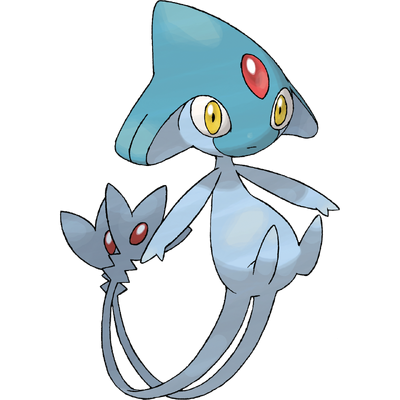 Superhuman Physical Characteristics, Non-Physical Interaction, Self-Sustenance (Types 1, 2, and 3), Immortality (Types 1 and 9), Cosmic Awareness, Telekinesis, Soul Manipulation, Power Nullification (Can block any moves known by it's opponent that it also knows via Imprison), Self-Destruction, Empathic Manipulation, Conceptual Manipulation (Type 1: Should be the same as Dialga and Palkia), Astral Projection, Mind Manipulation (Vastly superior to Mewtwo. Cyrus needed to capture it and the other memebers of the Lake Trio to create the Red Chain, which was the only item which could control Dialga and Palkia. Together the Lake Trio could free Dialga or Palkia from the control of the Red Chain as well), Absorption (If is harmed, after five days the offender will be drained of all their willpower, remaining immobilized for the eternity), Dream Manipulation (Contacted Ash via this method), Precognition (Foresaw its impending capture and in combat via the move Detect), Portal Creation, Illusion Creation, Energy Manipulation (via certain psychic type moves), Teleportation, Earth Manipulation, Regeneration (Mid-Low), Resistance to Fighting-type and Psychic-type moves (includes Mind Manipulation, Telepathy, Energy Manipulation, Sleep Manipulation and Telekinesis), Space-Time Manipulation, Reality Warping and Void Manipulation

Speed: At least Massively FTL+, likely Infinite (Should at least be faster than Pokémon like Necrozma) | Nigh-Omnipresent

Stamina: Limitless (Roams Sinnoh, seemingly unaffected by the extraction of the red chains and the immense pain it was forced to go through mere moments ago) | Limitless

Intelligence: Very High (Scaling to Giratina as it was instrumental in the solving of Giratina's test) | Nigh-Omniscient