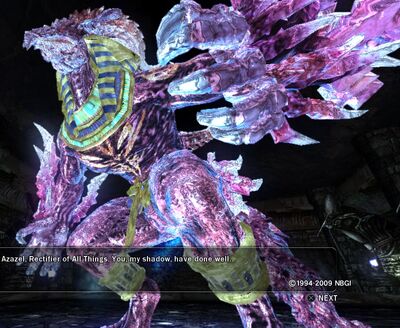 Azazel is the main antagonist and Final Boss of Tekken 6. He is the entity that telepathically spoke to Jin Kazama and told him to plunge the world into chaos to gather the necessary negative energy to awake and destroy humanity.

Name: Azazel, "Rectifier of All Things"

Classification: Demon, The ultimate evil that will destroy the world, Link to the Devil Gene

Attack Potency: Country level, possibly Multi-Continent level (Fought and lost against Lars and Raven, stated that the world would end if the seal was broken, he will unleash himself on Earth and being a threat to humanity, with Jin defeating him to save the planet. Even destroying the surface of the planet would require this much energy) | At least Country level, possibly Multi-Continent level (Far stronger than his previous form)

Lifting Strength: Class 100 (Physically stronger than characters, which can pick up and throw objects weighing over 80 tons with ease) | At least Class 100

Stamina: Very high (Survived attacks from both Lars and Raven)

Intelligence: Above Average (Azazel was shown to be intelligent enough to trick Lars and Raven into thinking he was dead)

Weaknesses: It's possible that, like the other users of the Devil Gene, he's vulnerable to the holy powers of the members of the Kazama bloodline and the Archers of Sirius.