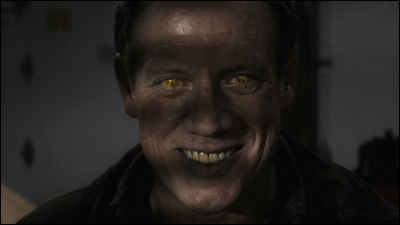 Azazel was a powerful demon who served Lucifer. Until Sin City, Azazel's name was not revealed and he was referred to by nicknames such as The Demon, The Yellow-Eyed Demon, or Yellow Eyes. Once he killed Mary Winchester, the Winchester men hunted him for nearly two and a half decades and finally killed him in revenge in the second season finale; however, his actions continued to influence events and characters even years after his death. For example, both Sam and Dean have been haunted by visions or hallucinations of him.

Prior to his death, Azazel was also the tyrannical leader of the demon world.

Attack Potency: City level (One of the most powerful demons, capable of creating thunderstorms with his mere presence. Implied to have created the tropical cyclone Katrina. The most powerful and the first of the Princes of Hell, he is naturally above Ramiel and Dagon)

Speed: Subsonic+ movement speed (Was able to easily outpace multiple humans, but wasn't that much faster than them), Massively Hypersonic reactions (Power scaling from Dagon who can keep with angels)

Durability: City level (Although regeneration and the nature of his true form makes him very hard to kill)

Intelligence: Genius; plotted for Lucifer's escape from the Cage years before the Winchesters were even a noticeable factor, even capable of covering up the evidence of his doings and plans that Angels aren't able to uncover despite their temporal abilities even.