VS Battles Wiki
Register
Don't have an account?
Sign In
in: Characters, Book Characters, Cthulhu Mythos,
and 21 more 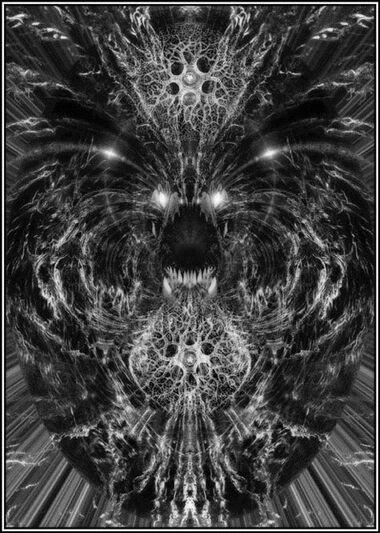 Azathoth is the lord and master of all existence, governor of the outer chaos that serves as the residence of the all-powerful Ultimate Gods and primordial creator of all things, who resides on a black throne at the centre of the Abyss, from which he rules all of time and space, lying in a seemingly dormant state while his subjects mindlessly dance around it, playing cacophonic, discordant music for their Master for reasons yet unknown, while the Daemon Sultan himself gnaws and mutters his own dreams, which lie beyond even his own understanding.

Name: Azathoth, The Daemon Sultan, The Nuclear Chaos, The Blind Idiot God, The Lord of All | None.

Classification: Lord of All Things, Ruler of the Ultimate Gods.

All previous powers and abilities on an unfathomably higher scale, as well as: Transduality (Type 4), Omnipresence, Acausality (Type 5)

Attack Potency: High Outerverse level (Resides at the centre of Outer Chaos as the boundless ruler of all existence, governing all of the Ultimate Gods from his own throne and having been responsible for their birth, as well as the creation of all things) | Boundless (The Supreme Archetype is an all-encompassing oneness that exists as "All-in-One and One-in-All of limitless being and self," acting as the animating essence of all existence that subsumes even the "ultimate mystery" which underlies all manifested phenomena and in which the Archetypes themselves participate in, holding even the Ultimate Abyss and its transcendent inhabitants as facets of itself, much like the rest of existence is comprised of fractionary aspects of them)

Intelligence: Exists on a level that is utterly beyond the comprehension of humans and gods alike, causing its nature to be perceived as that of a mindless, blind entity with no agency of its own, though that is strictly from the limited perspective of lower entities.