Kenpachi Azashiro (アザ史郎 剣八, lit. Azashiro Kenpachi), formerly called Sōya Azashiro (アザ志郎宗谷, lit. Azashiro Sōya), is the former 8th Kenpachi of the Gotei 13 and the previous captain of the 11th Division. In order to gain the title of Kenpachi, he slew the previous one, Kenpachi Kuruyashiki, with his Bankai. He gained this title for unclear reasons. It's also known that he started a rebellion within the Soul Society and was taken down by the Royal Guard. Since then, he was sentenced to Mūken, the lowest prison level within the Soul Society and his title given to his lieutenant.

Origin: Bleach: Spirits Are Forever With You

Powers and Abilities: Superhuman Physical Characteristics, Master Swordsman, Master Hand-to-Hand Combatant, Pseudo-Flight, Spiritual Awareness (Can see invisible spirits and objects), Extrasensory Perception (Can sense beings with Reiatsu), Longevity, Can take his reiryoku and exert it as reiatsu, Statistics Amplification (Can use Shunpo to boost his speed), Dimensional Travel (With Senkaimon), Teleportation, Reishi Manipulation, Stealth Mastery (By fuse with the surrounding substance whether it's inorganic or organic, Azashiro can make his presence can't be sensed and his reiatsu can't be felt by anyone), Gravity Manipulation (With Hadō 90), Fire Manipulation (With Hadō 96), Intangibility, Fusionism and Durability Negation (Azashiro's bankai allows him to fuse into the atmosphere to phase through most foes' attacks. Furthermore he can also fuse with any substance whether it's inorganic or organic and destroy his enemy’s internal system), Limited Duplication (By imitating and copying his mouth and hands within each spaces of air, he was able to chant hundreds of Hadō level 90 and 96 at the same time), Air Manipulation and Pain Manipulation with Razor Technique, BFR (Shinigami can transfer the souls of the dead to either Soul Society or Hell depending on the deeds they've committed when they were alive with their Zanpakuto), Soul Manipulation (Shinigami can directly damage souls with their Zanpakutō), Invisibility, Non-Physical Interaction (Can harm and interact with intangible spirits and objects), Overwhelming Aura (Spiritual pressure can passively induce ailments ranging from paralysis to fear inducement), Resistance to Soul Manipulation, Illusion Creation and Perception Manipulation (By mixing his senses with his surroundings, he can see through all situations at-hand and can hear everyone’s conversations. Furthermore, using this same ability allow him to even outmaneuver Sosuke Aizen's Kyōka Suigetsu's complete hypnosis)

Attack Potency: City level | Mountain level+ | Mountain level+ (It took the Royal Guard to stop him, and Kenpachi without the eye-patch to supposedly kill him, and the battle remains undecided) | Unknown with his Bankai Fusing technique, it also ignores conventional durability

Stamina: Extremely high, it took the Royal Guard to stop his rampage

Range: Extended melee range with his sword | Unknown after fusing with the Air around him

Intelligence: It's been known that Azashiro was an intelligent person. He, like Aizen, tends to plot plans that'll last and can be initiated for years on end. Also, to prove his intelligence even further, it's been known that he takes about 1 year to fully understand the specs of the Soul Society and use it to dominate the Sereitei.

Weaknesses: He suffers from high levels of unjustified arrogance, his Bankai is affected by skills like the Shikai of Yumichika or the most basic ability to absorb or collect Reishi like the Quincy's, and from this Azashiro can receive a lot of damage. It takes one year to merge with the Seireitei once he breaks his Polymerization. While in the molten state, bodily characteristics of Azashiro plummet.

Bankai: The ultimate and final release to a Zanpakutō. The difference in power between Shikai and Bankai is generally around 5-10 times more powerful. Even though Bankai is the final stage of a Zanpakutō, it does not mean the Shinigami's growth ends there. A Bankai, especially one recently obtained, can evolve even further as its Shinigami gets stronger. Azashiro's Bankai is Uru Zakuro. 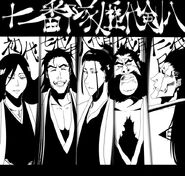