VS Battles Wiki
Register
Don't have an account?
Sign In
Advertisement
in: Tier 4, Tier High 4-C, Tier 4-A,
and 38 more 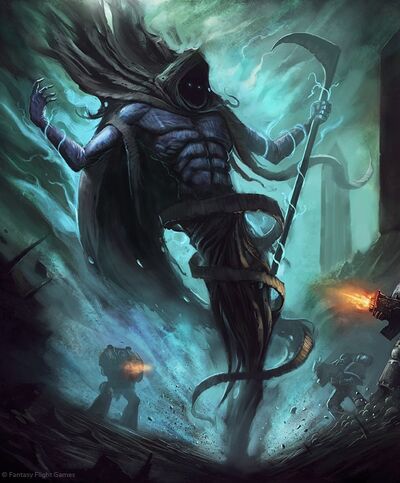 The Nightbringer is one of the C'tan who was defeated by the Necrons during their great rebellion against the C'tan masters who had forced them into the biotransference of their minds into their undying mechanical forms. The Nightbringer's essence was divided into dozens if not hundreds of C'tan Shards, each held captive within a device known as a Tesseract Labyrinth. Each C'tan Shard is only released by the Necrons when the contingencies of the battlefield have so turned against them that no other weapon will prove able to carry the day. In such circumstances, the Necrons will release a C'tan Shard, whose constituent energy has been sealed within a mechanical body composed of the same living metal Necrodermis as the Necrons themselves. The Nightbringer's C'tan Shard is armed with a powerful C'tan Phase Scythe, and is usually manifests as a dark, towering cloaked reaper that shines with dark light, with gray and black colours similar to the traditional human mythological image of death known as the Grim Reaper. It is an image that resonates deeply in the primal subconscious of many lesser races, and all who look upon the shard feel the cold fingers of death upon their throats, for in its terrible and majestic form is the inevitability of their destruction. This stems from the Nightbringer's great slaughter of younger races during the War in Heaven, which reached a point where servants of the Old Ones learned their fear of death from him and his image entered the collective unconsciousness of many races as the personification of Death. Only the Orks, the descendants of the Old Ones' warrior race known as the Krork, are rumored to have been spared his attentions, and that is potentially why the Orks do not fear death.

Age: As old as the universe itself

Attack Potency: At least Large Star level (Shards of the Nightbringer were confirmed to have destroyed many stars and left solar systems once full of life in complete ruin. A starving, nearly completely drained Shard of the Nightbringer consumed a red giant star approximately 90 million kilometers in diameter, absorbing all the energy it would have put out in its last 2,000 years). Ignores durability with many of its attacks. | Multi-Solar System level (What was possibly a Transcendent Shard of The Void Dragon that fought against the Emperor. A restricted, imprisoned Transcendent C'tan whose own power is constantly being drained to fuel its very prison is still perfectly capable of pulling stars from the sky and tearing apart the flow of space-time. The Breath of the Gods, which was powered by a C'tan Shard, was capable of creating nebulae and star systems from the waste product of the universe, as well as drastically warping the space-time of sizable chunk of the galaxy.), possibly much higher (The Dragon of Mars was capable of creating a seemingly infinite space within its prison. The Breath of the Gods' misuse was sending past, present, and future on a collision course while undoing universal laws). Ignores durability with many of its attacks. | Hyperverse level (The C'tan have absolute mastery over the material universe and all its extensions, of which the basic 4-D structure we perceive is only a fractional part of a greater whole, which contains a number of higher dimensions so great it cannot be expressed by something so limited as human language), likely High Hyperverse level (Battled Kaela Mensha Khaine in an incredibly difficult fight, and inflicted permanent damage upon the deity, though was ultimately defeated and shattered into countless Shards)

Speed: Massively FTL+ at their strongest (Single Shards can vary greatly in power and speed, especially if inhibited by being forced to follow Necron commands. A heavily weakened Shard of the Nightbringer traveled seventy thousand light years in an absolute maximum of three months.) | Massively FTL+ (Capable of incredibly quick intergalactic travel) | Immeasurable

Durability: At least Large Star level when actively protecting itself, lower otherwise (Weaker Shards usually have necrodermis shells that are far easier to pierce, thus rendering them vulnerable to being destabilized despite their immense power) | Multi-Solar System level, possibly much higher. Significantly lower when restrained by a Tesseract Labyrinth. | Hyperverse level, likely High Hyperverse level (His essence was unharmed after his Necrodermis shell was shattered by Khaine)

Intelligence: As a Shard, the Nightbringer is quite simplistic as its one goal is to bring death to its masters' enemies, but as a Transcendent C'tan, he has eons of knowledge at his disposal, causing Necrons using these larger Shards to be much, much more careful.

Weaknesses: Due to limited cognitive functions compared to their full selves, most Shards are unable to call upon the fullest extent of their power, for they do not realize they have it. They often only use the amount of power they are commanded to, and nothing more. | Extremely heavily restricted by a Tesseract Labyrinth if they are under Necron control. | The primary weakness of the C'tan is their inability to comprehend the Warp. It is speculated that they find it impossible to survive in it and are particularly susceptible as a result to Warp-spawned psychic powers and the psykers that wield them. It is also speculated that they have set up the networks of pylons on Cadia, with the likely intention of sealing off the local area of realspace (i.e. the galaxy) from the Immaterium, thus cutting off the Chaos Gods' influence and starving them.

C'tan Shards are beings of reality-warping power. Their abilities are many and varied, often harking back to those their far more powerful parent-entities enjoyed. A C'tan Shard is always capable of unleashing two of the following abilities which have been recorded by Eldar scholars.

A Transcendent C'tan is a far more powerful entity than a standard C'tan Shard. As such, Transcendent C'tan are able to unleash these lethal abilities when the Necrons deign to release them upon the battlefield. Every Transcendent C'tan must possess one of the following powers, though they cannot be unleashed when the C'tan is fully shackled within the confines of the Tesseract Vault:

A Transcendent C'tan is able to manifest two of the following Ascendant Powers, and can utilize them to devastating effect on the battlefield:

Note: These stats are for the post-retcon (and now the official) Necrons which have considerably upped the strength of the Necrons and the C'tan, especially since many of the C'tan's older feats were changed to have been done only by simple Shards. It should also be noted that the single shard powers are shared abilities between all the C'tan.